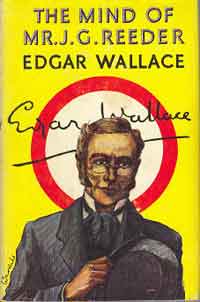 Edgar Wallace first introduced his detective Mr J. G. Reeder to the world in his 1924 novel Room 13. Although Mr Reeder played a subsidiary role in the novel the character’s potential was obvious to Wallace and in 1925 he penned a short story collection, The Mind of Mr J. G. Reeder, in which this unlikely sleuth would take centre stage.

Mr J. G. Reeder works for the Public Prosecutor. He is a quietly spoken middle-aged man who dresses in a very old-fashioned manner and sports even more old-fashioned whiskers. He is to all outward appearances a harmless and slightly pathetic nonentity. Many members of the criminal fraternity have made the error of taking these outward appearances at face value; all have paid heavily for their mistake. As a Scotland Yard inspector remarks in one of the stories Mr Reeder may look like a frightened rabbit but in reality the animal he most closely resembles is the deadly green mamba. One bite and you’re dead in two seconds.

In his early career Mr Reeder had specialised in the detection of bank robbers and forgers, and more particularly counterfeiters. His appointment to the Public Prosecutor’s office offers him the opportunity to come to grips with a much wider sample of the criminal classes.

Mr Reeder considers himself to have a criminal brain. He know what a criminal is likely to do before the criminal himself is aware of it, and he knows all their weaknesses and the best ways of exploiting them.

The eight short stories in this collection deal with a disappearance at sea that is less innocent than it appears to be, with a Hindu criminal mastermind, counterfeiters, dissipated members of the nobility, embezzlers, a fraudulent scheme for finding sunken treasure and an assortment of gangsters. There are frequent murders, more often than not carried out by unusual and exotic means.

In the 1920s Edgar Wallace (1875-1932) was the reigning king of the thriller writers. His output was staggeringly vast and his sales were, by the standards of the day, astronomical. At one point it was estimated that one in every four books sold in Britain was authored by Edgar Wallace. He was execrated by the critics but he took no heed of such minor annoyances and his books just kept on selling.

While most of Wallace’s books were out-and-out thrillers, this being the genre that brought him his greatest fame, The Mind of Mr J. G. Reeder sees him turning his hand to the detective story, with considerable success. His plots are outrageous but cunningly contrived and there is not a single weak story in this collection.

Mr J. G. Reeder is a delightful creation. Despite his mild-mannered appearance he is one of the most intriguing of all fictional detectives. Wallace followed up the success of this collection with two more novels and another short story collection featuring this oddest of sleuths. The character would appear in several movies and in an excellent late 1960s television adaptation of The Mind of Mr J. G. Reeder.

Wordsworth have published two of the Mr Reeder novels, Room 13 and Terror Keep, along with the first Mr Reeder short story collection in a volume entitled The Casefiles of Mr J. G. Reeder. This volume represents outstanding value for money.

The Mind of Mr J. G. Reeder is magnificent entertainment from a master story teller and I recommend it very highly indeed.
Posted by dfordoom at 7:47 AM