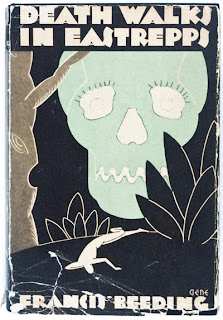 Francis Beeding’s detective novel Death Walks in Eastrepps was published in 1931. At one time it apparently had a huge reputation although it is now almost forgotten. Or at least it was forgotten until Arcturus re-issued it in paperback in their Crime Classics series in 2011).

Francis Beeding was the pseudonym used by Hilary Aidan Saint George Saunders (1898-1951) and John Palmer (1885-1944). They wrote both thrillers and detective novels under this name, their best-known book being probably The House of Dr. Edwardes which was filmed by Alfred Hitchcock as Spellbound.

Death Walks in Eastrepps is a serial killer novel, although the killer does not conform to modern ideas of what motivates such murderers. The murderer could however be described as a psychopath.

Eastrepps is a quiet seaside resort town in England. It is always busy in the tourist season but nothing really notable has ever happened there. That is until the Evil arrived. The Evil is the name given by the press to an unknown killer who appears to murder without any comprehensible motive. The first victim is Mary Hewitt, the sister of a retired army officer, Colonel Hewitt. No-one can imagine any plausible motive for the slaying, and when another corpse turns up the case seems even more confusing, there being no obvious link between the two victims even though there is little doubt that they were killed by the same person.

At length the local police have to confess themselves baffled and the Chief Constable calls in Scotland Yard. Detective Chief Inspector Wilkins is put in charge of the investigation.

Although it deals with what would later be described as a serial killer the structure follows the pattern expected in golden age detective fiction. It adheres to the generally accepted rules that governed the fair-play mystery novel of its era, although it does go rather close to breaking one of the rules. I will not indicate which rule as that would involve a major spoiler.

I had a number of issues with this book. Most notably I had reservations about the ending, and about the motive of one of the chief suspects.

This is one of those golden age detective tales that includes a lengthy epilogue in which the killer’s methods and motivations are explained in detail. I have no problems with a brief rundown of the killer’s activities that clarifies one or two minor points but I’m always suspicious when the explanations turn out to be lengthy and detailed. It gives me the impression that perhaps the author is not entirely confident that readers will find his plotting and his choice or murderer convincing or plausible. In this particular case I had such concerns the moment the identity of the murderer was revealed and the subsequent lengthy explanations only served to make my concerns more acute.

The other problems I had with this novel are largely a matter of personal preference. I have never been particularly fond of serial killer stories and I am a trifle suspicious of crime stories with a body count as high as this boasts. But I emphasise that this is entirely a matter of personal taste and should not be taken as a criticism.

This novel also includes a rather protracted courtroom scene. I personally felt it was a little too protracted.

Those reservations aside Death Walks in Eastrepps is not entirely lacking in entertainment value, and the plot is certainly ingenious enough.

The authors also wrote thrillers under the Francis Beeding pseudonym and I do intend to attempt one of these thrillers. I suspect that their general approach might be more suited to this genre.
Posted by dfordoom at 5:48 AM