The Thorpe Hazell Mysteries: And More Thrilling Tales On and Off the Rails 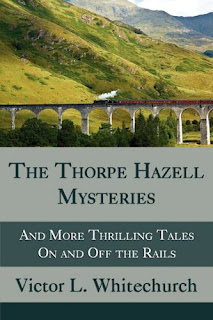 The Thorpe Hazell Mysteries: And More Thrilling Tales On and Off the Rails is a collection of the crime stories of the Rev. Victor L. Whitechurch (1868-1933).

To describe Whitechurch as a train enthusiast would be a colossal understatement. His knowledge of the mysteries of locomotives, railway signaling, timetables and railway matters in general was prodigious. What is even more remarkable is that every story not only involves railways but manages to make some piece of arcane railway lore or some technical detail of railway operations the crucial factor upon which the whole story revolves. Whitechurch was known for his fanatical attention to accuracy, which makes his stories even more fascinating.

When he created his best-known character, Thorpe Hazell, his aim was to make him as dissimilar to Sherlock Holmes as he possibly could - an objective in which he succeeded fairly thoroughly. Thorpe Hazell is a quiet self-effacing individual who is not merely a vegetarian - he is a confirmed and spectacular dietary fanatic. He is also prone to engage in extraordinarily bizarre physical exercises at the most surprising moments.

While the Thorpe Hazell stories are fascinating I am personally inclined to say that his other railway adventure stories are even more interesting. They are certainly varied. They include wartime railway tales set during the Franco-Prussian War and the Boer War, and numerous stories of international intrigue. Whitechurch gives us momentous diplomatic triumphs made possible only by intimate and intricate knowledge of the workings of the railways. There are even attempted assassinations of more than one very significant historical figure. It is easy to forget that the late nineteenth century was an age in which terrorism was a constant threat. Anarchist bombings were a regular occurrence and anarchists made countless attempts at political assassinations, some of them successful. Attempted anarchist outrages form the centrepiece of a number of the stories in this collection.

Although many of these stories are not true detective stories there’s no question that Whitechurch could write very effective stories in this genre when he chose to and some of the stories here have (quite deservedly) found themselves included in anthologies of the best Victorian and Edwardian detective stories.

As you might expect Whitechurch’s detectives rely more on their technical knowledge than on leaps of intuition. Despite his eccentricities Thorpe Hazell has a very logical mind when it comes to anything that involves rail travel, and Whitechurch’s other heroes are eminently practical men rather than armchair philosophers or psychologists. Thorpe Hazell has little interest in the motivations of criminals, but he can demonstrate very impressively that some detail of the working of a particular railway makes the guilt of a particular person absolutely certain.

If you enjoy Victorian and Edwardian detective stories then you will most definitely want to consider the purchase of this volume. If you happen to have an interest in railways as well this book becomes an absolute must-buy. Coachwhip Publications are to be commended for making the works of yet another wonderful forgotten or almost forgotten crime writer available to us, and in a handsomely presented volume as well. Highly recommended.
Posted by dfordoom at 2:43 AM