Amelia B. Edwards' All Saints’ Eve 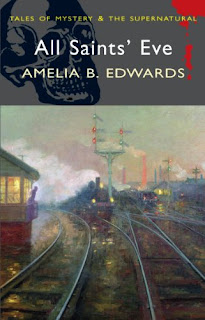 Amelia B. Edwards (1831-1892) was a successful writer of both crime stories and ghost stories, although she was to become even better known as a distinguished Egyptologist. She was also an indefatigable traveller, an obsession that furnished her with the backgrounds for so many stories set in various parts of Europe.

Her writing was admired by Charles Dickens who published many of her stories in All the Year Round, especially in the special Christmas numbers of that journal which featured stories of ghosts and other mysteries.

The stories collected in the Wordsworth volume All Saints’ Eve include stories of both the supernatural and stories of murder and mystery. About half of the stories fit into each of these two categories.

Her ghost stories are, sadly, less than impressive. To stand out amid the countless such stories that were published during the 19th century a ghost story needs to have at least one of four things going for it. It has to surprise the reader, it has to have an atmosphere of dread sufficiently strong to produce genuine chills, it has to be terrifying, or it has to create a feeling of the uncanny - of things that are but that should not be. Alas Edwards’ ghost stories fulfill none of these criteria. They are predictable and commonplace and the pay-offs to these stories invariably fall rather flat. She leads us to believe that something truly strange is going to happen and we are inevitably disappointed by the triteness of her endings. These are routine ghost stories, competently written but still no more than routine.

Her mysteries are not sufficiently mysterious to be particularly interesting and they lack sufficient suspense to be exciting.

The Four-Fifteen Express is one of her most celebrated ghost stories and while it is slightly better than the others included in this volume it still lacks any real impact.

Cain is moderately interesting, a story of a painting with an unfortunate history, but again we are left expecting more than the story delivers.

A Night on the Borders of the Black Forest has only a very faint suggestion of the supernatural, or perhaps rather we should say the paranormal, and it is one of the few stories that manages to generate some tension. It is also one of the few stories in this collection which actually makes us fear for the safety of the protagonist, and this is perhaps one of the gravest flaws of the other stories - we never feel any real suspense, any sense of menace. It’s a reasonably successful story.

A Railway Panic and The Guard-Ship at the Aire are all too typical in that they really don’t go anywhere. There’s perhaps some moderate excitement but there’s really nothing there to compel the reader’s interest.

The title story is the most ambitious tale here and it’s possibly the most successful, its advantage being that it has an actual plot that leads somewhere and it has a few twists to keep things interesting.

Whether you’re a fan of ghost stories or of mysteries you’re really quite safe to give this collection a miss. Wordsworth have done a splendid job at making the works of many unfairly forgotten writers available to the modern reading public at ludicrously cheap prices. There are many collections from this publisher in their Tales of Mystery and the Supernatural series that are much more worthy of the reader’s attention than this one.

On the while, disappointing and not really worth seeking out.