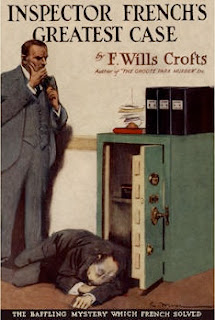 Freeman Wills Crofts (1879-1957) was one of the most notable British (actually Irish in this case) writers of the golden age of detective fiction. Inspector French's Greatest Case, originally published in 1924 (or 1925 according to some sources) was a fairly early work although by this time Crofts’ reputation was already well established.

Inspector French was the best known of Crofts’ fictional detectives.

At first it seems like a relatively simple case. The head clerk of a diamond merchants’ is found dead in the firm’s office. He has been killed by a blow from a blunt instrument. The safe is open and has been robbed of £33,000 worth of diamonds plus about £1,000 in cash. The murder weapon is quickly discovered. The local detective-superintendent calls in Scotland Yard and Inspector French is put in charge of the case. He anticipates few problems.

The inspector’s optimism proves to be ill-founded. There is no shortage of clues but frustratingly every single line of investigation starts promisingly but eventually ends in a blind alley. The investigation will lead Inspector French to Switzerland, the Netherlands and France and finally to a steamship bound for Brazil. After weeks of painstaking work the inspector not only finds himself with insufficient evidence to make an arrest, he also has to admit to himself that he still has no idea of the identity of the criminal. There are a number of suspects but in every case there is some baffling break in the chain of evidence that makes their guilt seem unlikely.

Inspector French is not the kind of detective who relies on sudden leaps of inspiration. He might not be brilliant but he is dogged and methodical. He is very much a professional. He knows that the work of a detective is one percent inspiration and ninety-nine percent perspiration. That does not worry him. He has an orderly mind. He enjoys hard work and he thrives on details. Nothing is too trivial to be investigated. If all the most obviously promising lines of investigation fail to produce a result then he will turn to the less promising ones and he will pursue them with the same thoroughness.

One thing that soon becomes obvious to the reader is that the criminal in this case must have a mind not dissimilar to French’s. This is a criminal plot that has been carried out with a methodical attention to detail. But French knows that no matter how clever a criminal might be he will still leave some traces of his activities. £33,000 worth of diamonds might be nice to have but it’s not really useful. Diamonds can be traced just as bank notes can be traced. At some point the criminal will have to try to convert those diamonds into currency that cannot be traced, and he cannot do that without leaving a trail. French knows that if he can match the thoroughness and patience of this criminal he must eventually prevail.

This attention to detail might sound as if it has the potential to become dull. It’s to the author’s credit that this book is never in danger of that fate. French’s patient stalking of the criminal is always fascinating. This book is in many ways a precursor of the “police procedural” sub-genre of crime fiction, and Crofts shows himself to be a master of this type of story.

That the book always remains interesting is due in part to the character of Inspector Joseph French. He might not be a colourful detective but he’s a character we grow to like more and more. He has his foibles but in general he’s a very decent and rather kindly man. He never forgets that a policeman’s job is all about people. When a witness starts telling a boring and interminable story about his own problems in life it’s part of the job of a policeman to listen. French knows that this will always pay dividends. That witness will then be more disposed to put himself out a little in order to help the police and will often volunteer more information than he would otherwise have done (information which may turn out to be vital).

The chief advantage of a police detective as compared to an amateur is that he has vast resources on which he can call. He has not just one pair of eyes but dozens of eyes all on the lookout for information, and some of the most crucial clues in this particular case are discovered by ordinary police constables just doing their job. And Inspector French knows how important it is to make the most humble constable know that his efforts are appreciated. This is yet another way in which French’s basic decency makes him a more efficient policeman, and also makes him a character we empathise with. We desperately want him to succeed in solving the crime because we feel he deserves success. He has earned it.

The reader will undoubtedly come to the conclusion that the author has also earned his success. This is a supremely well-crafted and thoroughly enjoyable mystery by one of the masters of the genre. Highly recommended.
Posted by dfordoom at 6:46 AM