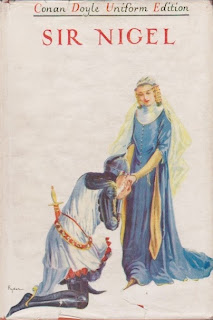 Conan Doyle believed that his historical novels represented his best work and as much as I adore Sherlock Holmes I’m inclined to agree with him.

In 1349 England had just endured the ravages of the Black Death. Young Nigel Loring is the only son of the celebrated knight Sir Neil Loring. The Loring family has fallen on hard times. Nigel lives with his mother and a handful of servants. A large proportion of the family estates has been lost to the neighbouring Waverley Abbey in a series of disastrous law suits. Not surprisingly Nigel nurses a considerable resentment towards the monks.

The conflict between the Abbey and the Loring family takes a strange and fateful turn when Nigel saves the life of one of the Abbey’s servants. As a reward he is given the very horse, an immensely large and powerful horse, that has just gone close to killing the servant. The sacrist of the Abbey, Brother Samuel, believes the horse to be so wild that no man could possible ride it. Nigel Loring, despite his slight stature, is a young man of exceptional spirit and courage. He tames the horse. Nigel now has a horse that would serve as a very fine war horse.

Nigel yearns to follow in the footsteps of his distinguished ancestors and to make a name for himself as a brave soldier and a noble knight. Unfortunately, although he has a horse, he has no armour and no money to buy a suit of armour. Without armour he can scarcely hope for an opportunity to join the wars in France and fulfill his ambitions, but fate is about to step in. As an indirect consequence of his quarrel with the Abbey he makes the acquaintance of Sir John Chandos, the most renowned knight in England (who also happens to be a most skillful military leader). Nigel is off to the wars as Sir John’s squire.

Nigel is accompanied by the archer Samkin Aylward, an archer of formidable skill who is destined to be a faithful follower and lifelong friend to Nigel.

Before leaving England Nigel vows to perform three deeds of honour in order to prove himself worthy of the love of Mary, the daughter of a jovial but aged knight

Nigel’s sea journey to France proves to be very eventful indeed, involving the pursuit of a French spy and an encounter with a Spanish fleet. It also offers Nigel the opportunity to perform the first of the three noble deeds in furtherance of his vow.

Many further adventures await Nigel in France. The glorious English victory at Crecy in 1346 had by no means diminished the military strength of France and the Hundred Years War had scarcely begun. The adventures of the young squire will find their culmination at the Battle of Poitiers in 1356, the epic victory won by a half-starved and heavily outnumbered English army commanded by Edward, the Black Prince.

Historical novels of the 19th century had all too often focused entirely on the glory and adventure of medieval warfare whilst ignoring the brutalities and cruelties that were part and parcel of medieval life. The writers of our own day who attempt historical fiction in a medieval setting tend to make the opposite mistake, concentrating on the brutality whilst ignoring the virtues of the medieval period. Conan Doyle struck precisely the right balance. In the pages of this novel you will certainly find brutality and cruelty, but you will also find honour and indeed chivalry. The people of the Middle Ages did not view the world in a way we view it. Medieval warriors were capable of a ruthlessness that shocks modern sensibilities but they were equally capable of acts of quixotic mercy and humanity that seem equally strange when viewed from the vantage point of the 21st century.

Conan Doyle was (quite rightly) contemptuous of historical novels that, in his words, draw the 20th century and label it the 14th. Unlike modern practitioners of historical fiction Conan Doyle wanted to capture the spirit of the 14th century. He did not want his medieval Englishmen to behave like contemporary Englishmen. Whether he succeeded in truly making his characters faithful to the reality of the Middle Ages there is no question whatsoever that he succeeded in making them very unlike the people of his own day.

There is equally no question of his ability to write magnificently entertaining historical novels. Sir Nigel is absolutely packed to the rafters with action and adventure, and with colourful and immensely fascinating characters.

Conan Doyle was one of the greatest writers of historical fiction of his own or any other age. I cannot think of anyone who has excelled him at this art and I consider myself to be reasonably well read in the genre.

Sir Nigel is very highly recommended indeed.
Posted by dfordoom at 10:35 AM