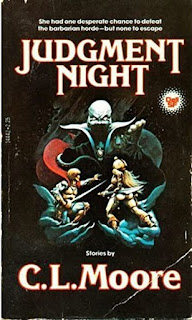 Judgment Night in the SF Masterworks series includes five longer works by C.L. Moore, including her first full-length SF novel, Judgment Night. It was serialised in the early 40s and published in book form in 1952.

Catherine L. Moore is best remembered for her Jirel of Joiry sword-and-sorcery stories and her Northwest Smith sword-and-planet tales. These stories gained her a considerable reputation in the 1930s.

Judgment Night is typical of her work in its lushness, its extraordinary imaginative inventiveness, its exotic weirdness, its subtle eroticism and its emotional ambiguity.

Juille is a sort of amazon warrior. She is also heiress to the vastest galactic empire in history, an empire that has endured for hundreds of generations. Now the empire faces its greatest threat, and Juille might be the best possible person, or the worst possible person, to meet that threat.

Juille believes that the rebels have to be crushed mercilessly and exterminated. There can be no compromise, no negotiation. Her father hopes for a negotiated peace. Juille hopes for war to the death.

It’s not the sort of place you’d expect to find a grimly serious amazon princess who has devoted herself to war and duty. But Juille is a woman and she has become aware that there are certain womanly pleasures that she has not experienced. She feels compelled to explore this side of herself. She finds a very handsome young man who is willing to assist her in these explorations. She cannot decide if she admires the young man or despises him. He seems very decadent. She’s also fairly sure that he intends to kill her, but she manages to divert his murderous impulses into much more pleasurable channels. Juille’s feelings about the whole episode are hopelessly muddled, which will have consequences when she meets the young man again under very different circumstances.

Juille has more than confusing emotions to deal with. War has indeed come and has brought with it treachery of various assorted kinds. All loyalties now seem suspect. Alliances are made that seem inevitably destined to end in betrayal.

And Juille will find herself hopelessly caught between reality and illusion, the plaything of the empire’s strange gods, trapped in endless illusions, and torn between love and hate. The fate of the empire rests in her hands, but should she heed the advice of the gods? 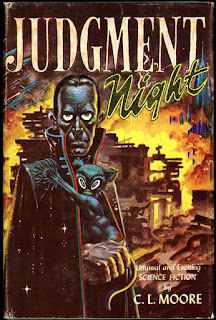 The gods are the hundreds of previous emperors, known as the Ancients, who exist in a kind of perpetual half-life. Their powers are vast, they rarely intervene in human affairs, when they do so it’s often to punish rather than reward and their advice is notoriously ambiguous. They’re not gods but they have god-like powers, and they behave with the capriciousness of gods.

Even when still alive the galactic emperors are treated as if they are semi-divine. Juille, as the next in line to the imperial throne, has always taken it for granted that she will be obeyed at all times without question. The empire is based on absolute power. The empire is facing a time of crisis. It will need an empress with strength, determination and courage. No-one has never doubted that Juille possesses those qualities. But the next empress will also need wisdom, coolness, flexibility and subtlety. Juille has trained herself to be a fighting machine and unfortunately has never shown any signs of possessing wisdom, coolness, flexibility and subtlety.

Her little dalliance on Cyrille will certainly have consequences. She has learnt how women love, and also how women hate. And how they do both at the same time.

This may have an effect on the decisions she will have to make. That young man, Edige, will have to make decisions as well. A lot of crucial decisions will have to be made. The Ancients are sometimes known to offer advice. But like all oracles their advice is usually dangerously ambiguous. And no-one has ever been sure what the Ancients actually want, or how much they care about the fate of the empire.

This is a pure science fiction novel in the sense that there are no hints of magic or the supernatural. But like all of Moore’s fiction it’s better described as weird fiction or what the French call Le Fantastique. Judgment Night is science fiction but at times with the feel of high fantasy.