The Man in the Red Hat 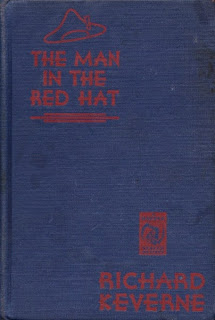 Richard Keverne is one of those writers who, quite successful in their own day, are now entirely forgotten. His real name was Clifford Hosken (1882-1950) and he wrote books under that name as well as under the name Richard Keverne. After military service in the First World War he worked as a schoolteacher and journalist and that is the sum total of the information I have on him.

Keverne was known as a writer of thrillers although it appears that he wrote detective stories as well, although that is merely a surmise on my part based on the fact that the heroes of at least some of his books were policemen, Inspector Mace and Inspector Artifex.

The Man in the Red Hat was published in 1930. A wine merchant named Mark Wickham meets a man named Fanshawe, quite by accident. Fanshawe is about to set off for Asiatic Turkey, apparently in quest of ancient manuscripts. Their conversation turning to painting Fanshawe happens to mention that an elderly aunt of his, a Miss Buckingham, owns a Gainsborough that as far as he knows has not been seen by anyone apart from his aunt for many years. Wickham is extremely fond of 18th century English paintings and expresses a desire to see this picture on the off-chance that it might really be a hitherto unknown work by that renowned artist.

Miss Buckingham is kind enough to invite Wickham to come to her house to see the picture and Wickham is more or less convinced that it really is a Gainsborough. And now slightly odd things start to happen, things that persuade Wickham that he has happened upon something of a mystery. Miss Buckingham suddenly and for no obvious reason gives up her very charming Georgian house and goes to live with Douglas and Una Gaymer. Wickham takes an immediate dislike to the Gaymers. Then Miss Buckingham asks Wickham to sell the painting for her. The transaction that follows arouses Wickham’s suspicions, and these suspicions are further encouraged by something that the old lady’s companion tells him, something that could be construed as having very serious connotations.

Wickham is not a detective, he is merely a wine merchant and not even a very good wine merchant. Nonetheless he finds himself drawn into a situation that will force him to play at amateur detective. He is somewhat reluctant to do so but he has not a shred of evidence that he could take to the police, and yet he feels more and more sure that something sinister is going on. And of course what is really going on turns out to be quite different from Wickham’s initial suspicions.

Keverne unfolds his plot at a rather leisurely pace. This proves to be a strength rather than a weakness. Mark Wickham is an ordinary sort of fellow, not at all the sort of man who becomes involved in extraordinary events. And at first the situation seems merely odd rather than sinister. Wickham is inclined to believe that there is really nothing very serious going on but his curiosity and a strange feeling of responsibility to Miss Buckingham prompt him to probe a little deeper. And as he does so the situation seems more suspicious although it is no doubt merely a case of an elderly and eccentric old woman being taken advantage of. Certainly it could not possibly involve anything more serious, like murder.

Wickham behaves as an ordinary sort of man would behave. He is reluctant to believe that he may have stumbled upon a crime and that the crime might be a very serious one.

Wickham might be ordinary but he has a romantic streak in him. He does not like to see innocent people victimised and he is possessed of a certain doggedness that he himself had never suspected. He certainly had never imagined himself cast in the role of hero. He would be infinitely relieved if he could walk into the nearest police station and hand the matter over to someone better versed in such matters than himself, but since he has insufficient evidence to cause the police to ac he pushes on. Having started on the trail he cannot abandon it.

While this book can perhaps be regarded as a thriller you’d have to be prepared to accept a very broad definition indeed of thriller. It is most definitely not a thriller of the John Buchan-Sapper-Dornford Yates variety. It is more of a low-key mystery thriller (although much more of a mystery than a thriller) with the emphasis on suspense rather than action and derring-do. Its hero is most certainly not remotely in the Bulldog Drummond mould.

Keverne’s style is also much more low-key, in fact closer to the style we associate with the so-called “humdrum” school of detective fiction. That’s not to suggest that Keverne’s writing is in any way dull. He knows how to build suspense gradually but inexorably and his prose is straightforward but pleasing, and he has an ability to sketch in the personalities of minor characters quickly but deftly.

This is a story in which we know the identity of the culprits fairly early on but what we don’t know is exactly what it is they’re up to. Their intentions are clearly criminal but we’re not certain exactly what crime or crimes they’re conspiring to commit.

The Man in the Red Hat is an engaging and generally entertaining story and one has to wonder why its author has been so completely forgotten. My judgment is that, as long as you accept that it’s a mystery rather than a thriller, it’s worth a look if you can find a copy.
Posted by dfordoom at 12:38 AM