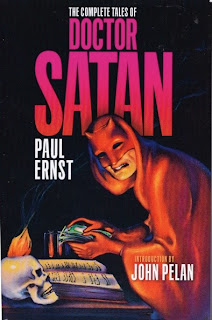 The eight Dr Satan stories of Paul Ernst appeared in Weird Tales during the course of 1935 and 1936. Dr Satan is a diabolical criminal mastermind and that’s something that always appeals to me. All eight stories are included in The Complete Tales of Dr Satan published by Altus Press.

Paul Ernst was a prolific pulp writer and was best known as the creator of superhero The Avenger in the 1930s, the Avenger being a kind of Doc Savage clone.

Dr Satan is in reality the scion of a very wealthy family although no-one knows his true identity. He has sampled all the thrills and all the ordinary vices that life has to offer, and they are not enough for him. Seeking the ultimate thrill he has turned to crime.

Dr Satan’s plans always involve extortion in one form or another. He has no need of money but making large amounts of money by illegal means is part of the thrill.

Dr Satan employs both scientific and occult knowledge in pursuit of his aims. He has a vast store of both.

Of course any diabolical criminal mastermind has to have henchmen, and Dr Satan’s are particularly creepy. Girse is a tiny man who bears more than a passing resemblance to a monkey. Bostiff is a giant, or rather he would be a giant except that he has no legs. He propels himself by his arms which are possessed of colossal, almost superhuman, strength.

And of course any diabolical criminal mastermind has to have a nemesis, and Dr Satan’s is Ascott Keane. Keane is also wealthy and bored but he has tuned to criminology rather than to crime. Keane’s knowledge of science and the occult equals that of Dr Satan.

Dr Satan comes up with a wide variety of extremely ingenious means of killing or maiming his enemies. The bizarre and hideous means he employs are calculated to exert the maximum amount of terror. He also has hypnotic mind-control powers (as does Ascott Keane).

The biggest weakness of these stories is that they all follow more or less the same formula. Dr Satan demands money from wealthy and powerful men and then two or three such men are found murdered in strange and horrible ways. They will serve as a warming to the others that they would be well advised to pay up. Ascott Keane is either called in or he hears about these weird killings and shows up on his own account. There is then a struggle between Dr Satan’s powers and those of Keane. Keane invariably wins, but Dr Satan always escapes. Hollywood Horror is the best of the tales, largely because Dr Satan’s method of terrorising his victims is both original and strangely fitting.

While it’s true that the stories do stick pretty much to a formula the interesting thing is that they gradually improve with some of the later stories having some quite intriguing twists. Both Horror Insured and Beyond Death’s Gateway introduce more overt occult themes and these two stories could both fairly be described as horror stories, and quite good ones.

John Pelan in his introduction to the Altus Press edition warns the reader not to dissipate the effect of these stories by reading them one after the other, and this is very sound advice.

Despite their formulaic nature these stories are fun and very very pulpy. The means adopted by Dr Satan to carry out his murders are always ingenious and imaginative. The stories were only moderately successful at the time, possibly because Weird Tales was not quite the right venue for them and also because the craze for weird detective stories had not yet arrived.
Posted by dfordoom at 4:17 AM