Sant of the Secret Service 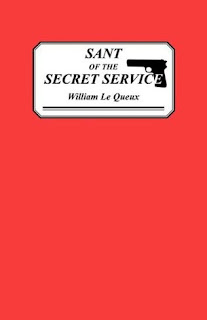 William Le Queux (1864-1927) was a prolific Anglo-French writer of mysteries and espionage thrillers. Along with E. Phillip Oppenheim he more or less invented the spy thriller genre. Sant of the Secret Service, published in 1918, is one of his later works in the genre.

The book is a king of episodic novel, chronicling the adventures of spy hunter Gerry Hunt. Along with his colleague, the beautiful and multi-talented Gabrielle Soyez, he is kept busy dealing with the hordes of German spies who infested Britain and France during the First World War. While there were undoubtedly real German spies operating during this period it is highly unlikely that they existed in anything like the numbers conjured up by Le Queux’s vivid imagination.

Le Queux’s style was lurid and sensationalistic to an extreme degree. The modern view is that his stories are dated and slow-moving. Perhaps, but they have charms of their own, conjuring up a vanished world. There’s less action than a modern reader would expect in a spy thriller but Le Queux does his best to create an atmosphere of breathless excitement.

Le Queux’s approach is very much of the Edwardian period and he never bothered to alter it. To him espionage was a game for gentlemen. Even in 1918 he would have appeared to possess the prejudices of an earlier era. In keeping with his Edwardian approach he relies a good deal on having his characters, especially Gabrielle Soyez, adopt disguises. This was a standard feature of thrillers and mysteries of the Victorian and Edwardian periods an by the time this book appeared it was already an old-fashioned technique. I don’t think being considered old-fashioned would ever have bothered Le Queux.

This is the spy thriller as melodrama and the plotting is somewhat clunky. There’s not much to the characterisations. Le Queux’s heroes were heroic and his villains villainous and it goes without saying that the heroes are French and English and the villains are German. The idea that German espionage agents might have seen themselves as loyal and patriotic servants of their country is not one that you will this author exploring.

Gabrielle Soyez must qualify as one of the earliest female master spies in literature and she’s portrayed as being more than just an attractive assistant to the hero. She is a heroic and capable figure in her own right.

Whatever his faults Le Queux was a major figure in the development of the spy thriller and if you claim to be a fan of that genre you need to read at least one of his books (and at least one of Oppenheim’s). Their works would by the 1920s be displaced by the far superior and more realistic and sophisticated espionage tales of John Buchan and Somerset Maugham but they had served their purpose, creating a readership for the genre that has not yet shown any signs of disappearing.

Sant of the Secret Service is fun in its own way and can be recommended to readers who are prepared to judge it by the standards of its own time.
Posted by dfordoom at 6:42 AM