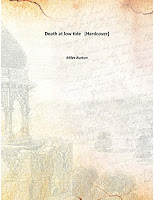 Captain Stanlake is Harbour Master at Brenthithe, a sleepy little port in the West Country. Stanlake is a man with vision but he is not a popular man. He has plans to transform Brenthithe into a bustling commercial port. This would be of great benefit to some of the town’s inhabitants, but not to all of them. Brenthithe is effectively two towns. The Old Town relies on fishing and on Brenthithe’s rapidly declining status as a port. The New Town depends on tourism. Stanlake’s plans would benefit the Old Town but would involve draining Bollard Bay, which would effectively destroy the tourist trade (Bollard Bay being a paradise for small boats).

All of this might seem irrelevant but it is in fact crucial to the plot. Stanlake’s plans have aroused a great deal of opposition and there are many townsfolk who would be overjoyed were he to fall off the pier one fine day and drown. And one day he does fall off the pier. But he does not drown. He is dead before he hits the water, with a bullet hole neatly placed between the eyes.

The Chief Constable realises immediately that he is going to need the assistance of the Yard, and that assistance soon arrives in the person of Inspector Arnold. The case might well beyond that fine officer as well and Arnold is rather relieved when his old friend Desmond Merrion turns up.

The case is baffling indeed. Stanlake was alone on the pier when he was shot. He could not have been shot from a boat - the angle at which the bullet struck the victim’s head precludes that possibility. Since he was entirely alone on the pier the obvious conclusion is that he shot himself. Not one person in Brenthithe believes that Stanlake killed himself. Inspector Arnold and Desmond Merrion do not believe it either. It was murder, but an impossible murder.

Equally baffling is the fatal bullet. Scotland Yard’s ballistics expert has never seen such a bullet. It was clearly home-made, and fired from no known make of gun.

Street was always fairly sound when it came to plotting and this novel is no exception. The murder method is delightfully ingenious. The trick with impossible crime stories is to make said impossible crime suitably unusual and baffling whilst still making the solution plausible. The trick is pulled off here with considerable success. Street loved clever plots involving guns, perhaps not surprisingly in view of his service as an artillery officer in the First World War. Street had later transferred from the artillery to intelligence. It’s hard to think of a more perfect background for someone who would turn to the writing of detective fiction - an insider’s knowledge of both ballistics and the art of deception!

In Dr Priestley Street had created a reasonably colourful fictional detective - opinionated, eccentric and cantankerous. Desmond Merrion by comparison seems a little on the bland side. Street was more interested in plotting than in characterisation in any case but in this novel he does create one memorable character - the town of Brenthithe itself. It is a town divided against itself. It is also a town caught between the past and the future. It’s rather like England, a country already in decline caught between an industrial past and an uncertain future that might bring prosperity to some but ruin to others. All very prescient for a novel written in 1938. Street shows sympathy for both sides in the divided town. Stanlake was a very abrasive man but in his own way he believed he had the best interests of the town at heart. Like most visionaries his vision had some huge blind spots in it. Whatever his faults he did not deserve to be murdered, but on the other hand it’s hardly surprising that those whose livelihoods were threatened by his plans should have considered him to be a deadly enemy.

I can’t help thinking that this novel would have been even more fun as a Dr Priestley mystery. As it stands Death at Low Tide is still a fine example of the detective fiction of the 30s. Highly recommended.
Posted by dfordoom at 9:53 PM