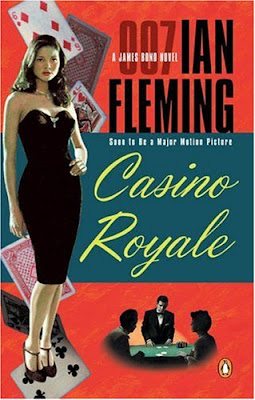 Published in 1953, Casino Royale was the first of Ian Fleming's James Bond novels. It immediately establishes the formula that was to make the Bond novels so successful, a formula that is quite different from that to be found in any of the movie adaptations.

A top Soviet agent in France, known as Le Chiffre, has landed himself in major financial difficulties. He is now trying to gamble his way out of trouble. Le Chiffre is paymaster to some very powerful communist-controlled trade unions in France. He’s a cool skillful gambler but the pressure on him is immense - if he fails to recoup the money he stole from union funds his Soviet masters will have no hesitation in executing him.

It so happens that one of the agents of the British intelligence services is also a skilled gambler - an ex-naval officer named Jams Bond. The British come up with a scheme not merely to destroy Le Chiffre but also to discredit the communist unions and the communist cause in general in France. The plan requires Bond to out-gamble Le Chiffre and to ensure that the Russian agent cannot make good his losses.

Much to Bond’s consternation he is assigned a female agent to assist him. Bond doesn’t approve of women spies. This particular spy, Vesper Lynd, also happens to be young and beautiful. Bond certainly approves of beautiful women but he likes to maintain a strict separation between business and pleasure.

There’s very little action in this book, but what it lacks in action it more than makes up for in suspense. The gambling scenes afford Fleming the opportunity to ratchet up the tension to almost unbearable levels. Even Agent 007 finds the stress is starting to get to him. To make things worse he discovers that he rather likes Vesper Lynd. He likes her to an extent that makes him very uncomfortable.

The big difference compared to the various films is the character of Bond himself. He’s perhaps not exactly likeable but he’s undeniably fascinating and rather complex. His brutal side and his rather strong streak of cruelty are hinted at in some of the movies but what the movies miss is his unexpected emotional vulnerability. Bond thinks of himself as a man who simply uses women for his pleasure and then discards them. It’s an elaborate firm of self-deception. In fact Bond is alarmingly prone to falling in love (I’ve only read half-a-dozen of the novels and he falls in love in at least three of them).

He’s also prone to periodic errors of judgment, another fact of his character that he covers up with self-deception. Both Casino Royale and From Russia With Love see Bond making catastrophic mistakes.

Bond’s weaknesses (not that falling in love is generally considered a weakness but it certainly can be when you’re a spy) may well reflect facets of Fleming’s own personality. I suspect Fleming was aware of these weaknesses and used them with considerable success to make his hero much more interesting than he might otherwise have been. Fleming may have been working in a genre that was mostly despised as pulp fiction but he was a rather good writer and the Bond novels have a lot more to them than you might expect if you’re only familiar with the character from the movies.

Fleming was also, along with W. Somerset Maugham and Graham Greene, one of those British spy writers who had an actual background in intelligence and/or espionage. Fleming had been responsible for planning several major intelligence operations during World War II so coming up with ingenious plots for his spy thrillers was something he was well prepared for.

Apart from all that Casino Royale is hugely entertaining. Perhaps one day there’ll be a decent movie adaptation of it.
Posted by dfordoom at 11:39 PM