The Openers of the Gate 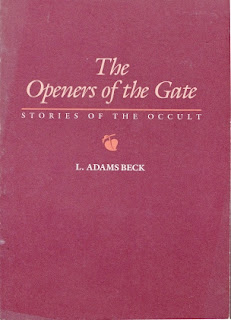 L. Adams Beck’s 1930 short story collection The Openers of the Gate is subtitled Stories of the Occult. That’s certainly a fairly accurate description as far as it goes but it is likely to create an impression that these are horror stories. Some of them can almost be considered as horror tales but the author’s purposes are rather different from those of the average horror writer. She makes it quite clear in the preface that she takes these things very seriously indeed, that in fact the occult is to her very much a reality and that she intended these stories to convey real Spiritual Truths. I offer this review as a warning to others who might repeat my mistake of buying this book under the impression they were buying a collection of gothic or horror tales.

The stories vary wildly in quality. Some are much too sentimental while others betray an embarrassingly naïve belief in what used to be described as mumbo-jumbo. Others still contain exceptionally interesting ideas and some contain moments that can genuinely be described as uncanny or even horrific. Some of these tales are set in England while others  take place in various parts of Asia, most of which Beck would have visited during her extensive travels.

Elizabeth Louisa Moresby (1862-1931), the daughter of an admiral, wrote under various pseudonyms, L. Adams Beck being evidently one she used frequently. In addition to her fiction she wrote books on various esoteric and spiritual subjects and was a devotee of Theosophy. That sort of thing was intellectually much more respectable in the 1920s (when the stories in this collection were written) than it is today. She was one of those Europeans who convinced themselves that wisdom was something only to be found in the Mysterious East and that in Asia everyone was immensely spiritual. It’s a belief that became very tedious indeed in the 1960s but even in the 1920s most people would have (quite reasonably) found such an idea annoying to say the least.

The title story is one of several so drenched in sentimentality and wishful thinking that the reader requires a very strong stomach to finish them. How Felicity Came Home is another egregious example of this tendency. Both stories illustrate the author’s obsession with the spiritual nature of animals. Lord Killary displays the author’s combination of severe morality coupled with syrupy sentimentality.

Waste Manor and The Mystery of Iniquity are much stronger and can be read at least in part as very effective and unusual horror. The Mystery of Iniquity even includes an example of what would today be described as a mind vampire. This story starts off extremely well and builds a nice atmosphere of weirdness and horror only to fall apart at the end when once again the spirituality of the East solves all problems.

Many Waters Cannot Quench Love takes place on a remote tea plantation in Ceylon (as it was then known). It’s one of Beck’s more interesting stories, a tale of a half-English woman and a drunken planter. It’s one of several tales in this volume that can be approached as offbeat ghost stories.

In The Horoscope an English landed gentleman rejects his own culture in favour of Indian culture, which is of course incredibly spiritual and full of wisdom while European culture is wicked and barbaric. If that sounds to you like a story that will turn out to be a load of irritating drivel then your judgment is spot on.

The Thug is rather intriguing, being one of several of Beck’s tales dealing with past lives. That would normally be enough to put me off completely but it’s actually one of her better efforts and it’s worth persisting with. An Englishman discovers that he is actually a member of the Thuggee cult. The Thugs turn out to be murderous thieves but of course (like every single person in Asia) they’re very spiritual. The story is rather better than it sounds.

Then we get to Hell, a remarkably creepy and unconventional ghost story that would be a very fine story indeed if Beck could have restrained herself from her customary metaphysical silliness.

The last tale is The Man Who Saw, a tale of the wisdom of the East that is truly one of the most excruciatingly bad and embarrassingly silly stories it has ever been my misfortune to encounter.

Overall a mixed bunch with a few unexpected highlights but unless you share the author’s belief that everyone in Asia is wise and spiritual while every European is stupid and barbaric or you hare her enthusiasm for Theosophy you will find this collection very very difficult to struggle through.
Posted by dfordoom at 1:57 AM