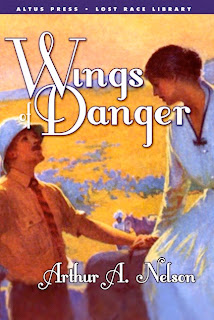 Arthur A. Nelson’s 1915 novel Wings of Danger is another of those lost world stories that I love so much. This time it’s Vikings in Africa. What’s not to love about that?

The narrator is Alan Severn, a gentleman adventurer in Africa. He is recalling events that, on internal evidence, happened in the early 1890s. Alan Severn and his cousin Sheridan Severn have invested all their money in a gold mine in southern Africa. They have reluctantly been forced to the conclusion that the mine cannot be made to pay without the investment of sums that they cannot possibly raise. They are facing ruin until, rather surprisingly, a man offers to buy the mine for £5,000. The man is none other than Cecil Rhodes.

Rhodes has come up with another of his plans to spread British power in Africa. He wants to use Alan Severn as his instrument. The idea is to create a situation that will force the British government to annex a new territory. The problem is that another power has similar ideas. They intend to use Leopold, the King of the Belgians, as their instrument. Leopold will declare a Protectorate over this territory but in reality the territory will end up under the control of the German Empire.

To carry out Rhodes’ plan the Severn cousins set out on a trek to previously unexplored regions of Africa. They soon encounter their rival, a charming and insanely brave Frenchman named Raoul de Roquemort. The Frenchman saves Alan’s life and the two expeditions join forces although neither Severn nor de Roquemort have abandoned their plans.

Alan Severn has a faithful servant named Ingulf. Ingulf’s origins are obscure. He won’t reveal anything about them and he does not appear to belong to any known African tribe. In fact his racial identity is quite uncertain. Raoul de Roquemort’s party includes a scientist named Dr Eric Ivarrson (with whom Severn has already become acquainted). Ivarrson has a theory that seems incredible - that Vikings not only reached southern Africa but actually established a kingdom there. He suspects that Ingulf will turn out to be proof of his theory.

Needless to say there is also a love interest. Alan Severn is in love with Norma Raylescroft. Her father is immensely wealthy and will countenance the possibility of his daughter’s marrying a possible fortune hunter. If Alan wishes to marry her he will first have to make his own fortune.

The combined Severn-de Roquemort expedition encounters numerous obstacles and dangers, not the least of which is an attack by an entire Matabele impi. Our adventures are outnumbered by at least fifteen to one but luckily de Roquemort had thought to bring along two Maxim guns. No matter how brave the Matabele might be they cannot stand against machine-guns.

The expedition eventually discovers a chain of extinct volcanoes. Within the gigantic craters of these volcanoes is a lost world. A Viking world. Most of the inhabitants are Africans or mostly African but some clearly have not only European blood but unmistakably Nordic blood. Their names are corrupted versions of Norse names. And culturally they are more or less pure Viking.

Considering the racial concerns that were so prominent at this period of history it’s interesting that Nelson clearly believes that culture is far more significant than race. Whatever their ethnicity might be the inhabitants of this lost world think and behave like Vikings.

The discovery of this hidden civilisation and of the Viking capital of Valkyria are astounding enough but the adventures of Alan Severn and his companions are far from over.

This book was originally published in serial form in Adventure magazine in 1915. It has all the action and all the thrills, combined with the romance, that the readers of that magazine would have expected. It has more than action however. However outlandish the central idea might be it is obvious that the author had put considerable thought into the matter, and had done at least some research on Norse sagas and Viking history.

The characters are more or less standard adventure characters although de Roquemort at least is a little more complex than one might anticipate. The African-Viking characters are neither bloodthirsty savages nor idealised noble savages. Some are vicious while others are brave and noble.

Wings of Danger is a very satisfying mix of adventure, romance and intrigue. Plus it has Vikings in Africa. That should be enough to satisfy anyone. Highly recommended.
Posted by dfordoom at 1:52 AM