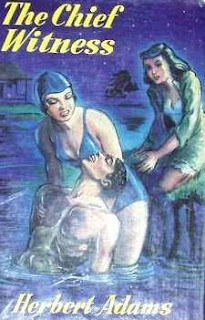 Herbert Adams (1874-1958) was an English writer of detective stories during the so-called golden age. He was successful enough to have had around fifty titles published but is nowadays all but forgotten. He has fallen into such obscurity that I have been able to find out almost nothing about him.

I can’t even find out for certain when this novel was first published. I’ve seen it attributed in different sources to 1935, 1939 and 1940. There’s no reference to contemporary events in the story, something that might have given a clue to the actual date.

The Chief Witness is one of a series of novels he wrote featuring amateur detective Roger Bennion and it appears to have been one of his most highly regarded works.

It’s certainly based on a very clever idea. Solicitor Alexander Curtis is found in his home, dead from a gunshot wound. As he fell he knocked over and broke a clock. The time at which the clock stopped gives the police the exact time of death - two minutes to eleven at night.

Some miles away the body of Alexander Curtis’s brother Frederick is found, also dead from a gunshot wound. As he fell his wristwatch was smashed, thus establishing the exact time of his death - two minutes to eleven on the same night.

That’s the sort of coincidence that Roger Bennion is not prepared to accept. The police are  at first inclined to suspect suicide in both cases but quickly realise they are dealing with murder in both cases. They are not happy about the coincidence either but they soon find themselves with very strong suspects for both killings. The trouble is that if these suspects are guilty there would seem to be no connection whatsoever between the two crimes. Roger Bennion is absolutely convinced that there must be a very strong connection indeed between the two killings. In fact he is certain that both brothers must have been slain by the same murderer or murderers. That of course raises the question of the apparently simultaneous nature of the murders but Bennion is confident he can find a solution to explain that.

What follows is a fairly typical golden age detective story but the gimmick of the two simultaneous murders is clever and it’s cleverly worked out.

Roger Bennion isn’t a particularly colourful detective but at least he isn’t irritating. You could say much the same for Adams’ prose - it isn’t fancy but it gets the job done.

On the whole The Chief Witness is a rather entertaining read, and it’s a book I can recommend to fans of golden age crime novels.
Posted by dfordoom at 9:35 AM