The Vengeful Virgin, by Gil Brewer 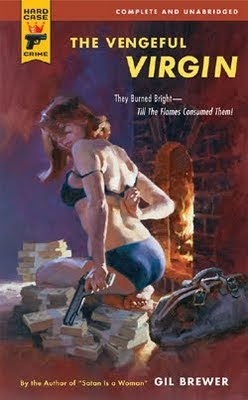 Gil Brewer’s The Vengeful Virgin was published in 1958 and, like so many of the titles from Hard Case Crime, has been out of print for years. It’s a reasonably entertaining if hardly startling piece of noir fiction.

Jack Ruxton is in his 40s and he’s always wanted to be a success. He’s tried various methods of achieving this goal, and now as a last resort he’s decided to try earning an honest living, as a TV repairman. He hasn’t entirely given up on the idea of easy money though.

He has built up a fairly thriving business but he’s in debt to his eyeballs. Then he meets Shirley Angela. Shirley is eighteen, with the kind of body that makes men do crazy things. Especially if they’re men like Jack Ruxton, with not much judgment and even less in the way of moral scruples.

Shirley lives with her stepfather, Victor Spondell. Victor is rich. Very rich. He’s also dying, but unfortunately he’s taking his time about it. Shirley looks after him. Not that she gives a damn about him, but he’s going to leave her all his money when he dies so for Shirley that’s sufficient incentive to keep her there acting as his nurse and housekeeper. If only he wouldn’t take quite so long to die.

She employs Jack to install a ceiling-mounted TV set in Victor’s bedroom, and an intercom system. She’s a real friendly girl and pretty soon she has Jack Ruxton eating out of her hand. She tells Jack her problems. Which mostly amount to the fact that Victor is taking so long to die. If only something could happen to speed the process up a little. Then she and Jack would have all that money, and they could be together forever. Because she really loves Jack. Does Jack have any ideas that might solve their problem?

In normal circumstances even a Jack Ruxton might think this could be leading up to a really bad idea, but Victor has an awful lot of money, and Shirley has a remarkably appealing young body. Jack would like to get his hands on both. He’d like it real bad.

The problem with this kind of story is that you pretty much know where it’s heading right from the start, and there isn’t a huge amount of scope for surprises. Especially back in the days when you couldn’t really countenance the idea of criminals getting away with their crimes.

Working within these plot limitations you really have to depend more on style than anything else. It’s the sort of thing James M. Cain did supremely well. None of his imitators ever quite equalled his ability to pull such stories off, and Gil Brewer is no James M. Cain.

That’s not to say that Brewer wasn’t a competent writer and The Vengeful Virgin is entertaining enough. If you enjoy hardboiled fiction with a side order of sleaze then this one should fit the bill well enough.
Posted by dfordoom at 12:13 AM