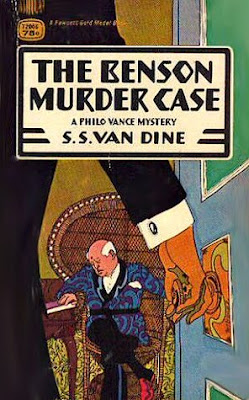 Of all the books that have some claim to being considered classics of the crime genre none have divided readers quite so dramatically as S. S. Van Dine’s Philo Vance novels. The features that exasperate and enrage critics of these books are the very things that delight their admirers. I’m very much in the camp of the admirers.

The Benson Murder Case kicked off the series in 1926. Philo Vance has often confided to his friend Markham, New York’s District Attorney, that he would love to have the chance to try his hand at crime-solving. He has developed some interesting theories on the subject and it would amuse him greatly to put them to the test. When wealthy broker and somewhat notorious playboy Alvin Benson is found shot to death in puzzling circumstances Markham is finally persuaded to give Vance his opportunity.

Vance wastes no time in making obvious his considerable disdain for the professional crime-solvers of the police and the DA’s office. To Vance they seem to be hopelessly addicted to the pernicious practice of looking for physical clues and circumstantial evidence. All of which is complete nonsense, as he informs them with more candour than tact. His own theory is that psychology is the key. Some people are psychologically capable of murder; some are not. And some crimes could only be committed by people with a very particular personality profile. If you have the instinct and the intelligence to analyse the personalities of the various suspects then finding the guilty party becomes child’s play.

All of which is of course complete moonshine, but that just adds to the fun of the Philo Vance mysteries (or if you are not a fan it just makes them all the more annoying). If you like plots that make sense and if you like your fictional detectives to employ realistic and plausible methods of criminal investigation then these books are not for you. It’s not that Van Dine’s plots aren’t clever and intricate - it’s just that their connection with reality is more than a little tenuous.

And then there’s Philo Vance himself. His aristocratic arrogance, his very affected English accent (acquired during a prolonged stay in England), his contempt for modern life, his political views (circumstantial evidence is, he explains, almost as great a folly as democracy), the fact that no matter what subject comes up during an investigation Vance will prove to an expert in that field - all these things will either delight or incense the reader.

While Van Dine is very much of the Golden Age school of crime writing with the emphasis on puzzle-solving at the same time Vance’s belief in the psychological approach to murder is an interesting anticipation of more modern trends in crime fiction.

Personally I just can’t get enough of Philo Vance.
Posted by dfordoom at 2:12 PM