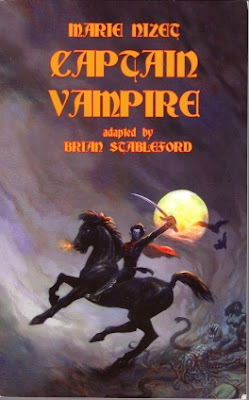 Marie Nizet was 19 years old when she wrote Captain Vampire. Published in 1879, it’s been claimed as an influence on Bram Stoker’s Dracula, published fifteen years later. In fact Captain Vampire is a remarkable work in its own right and the comparison to Dracula is both misguided and unnecessary.

Nizet’s novel was one of the many 19th century vampire tales that pre-dated Dracula. It owes a certain debt to John Polidori’s 1816 The Vampyre but Nizet was primarily interested in the symbolic significance of the vampire myth.

Nizet was born in Brussels and never visited Romania but her novel is heavily influenced by both Romanian folklore and ever more especially by Romanian politics. She had two very close female friends who were Romanian and they had an immense influence on her.

In his introduction to the novel translator Brian Stableford claims this as one of the first important anti-war novels and a significant example of vampirism as a metaphor for the horrors of war. Actually it seems to me to be much more concerned with Romanian nationalism and with an anti-Russian message rather than being concerned with the evils of war.

The background to the novel is the Russo-Turkish War of 1877-78 which resulted in Romanian independence from the Ottoman Empire, but at the cost of political subservience to Russia. Many in Romania felt that Romanian troops had been cynically used as cannon fodder by the Russians and the arrogant Russian attitude towards Romania caused bitter resentment.

The vampire of the title is Boris Liakoutine, a Russian officer with a mysterious and sinister reputation. It is said he has cheated death several times, in impossible circumstances. It is also said that several young women unlucky enough to become involved with him have met strange deaths. Liakoutine earned the sobriquet Captain Vampire although he is now in fact a colonel.

Ioan Isacescu is the son of a moderately prosperous peasant in a small village near Bucharest. He serves in a Romanian army regiment and is engaged to be married to the beautiful Mariora. The impending war is regarded with foreboding by the villagers who have no love and no trust for their Russian allies. Ioan, his friend Mitica and their friend Relia Comanescu (a young member of the local gentry) will all find themselves embroiled in the war, and in the disastrous assault on the infamous Gravitza Redoubt in which the Romanians believed their troops were cynically exposed to needless slaughter by their supposed allies.

Both Ioan and Mariora will have fateful encounters with the notorious Captain Vampire.

The supernatural elements in this story are very ambiguous indeed. They are not explained away as having a natural explanation but at the same time such an explanation does seem possible. The author is in fact much more interested in the figure of the vampire as a metaphor. While Stableford believes that in this case the vampire represents war it’s just as likely that in fact the vampire represents the Great Powers, and especially Russia, and their treatment of the smaller nations of Europe.

Nizet’s book enjoyed no success in its own time and was forgotten for many years. Its less than flattering attitude towards military glory and power politics would have guaranteed its success half a century later but in 1879 the message fell on stony ground. The Black Coat Press edition seems to be the book’s first appearance in the English language.

Nizet was quite a skillful writer and when you consider this was a first novel by a 19-year-old it’s an impressive achievement. Definitely worth seeking out if you enjoy slightly unusual approaches to the vampire mythos or if you have an interest in the evolution of the vampire sub-genre.
Posted by dfordoom at 7:51 PM