The Sea Hawk, by Rafael Sabatini 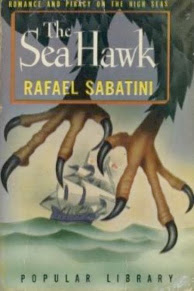 I have a bit of a weakness for swashbuckling tales of adventure, and I think it’s fair to say that the greatest writer of such stories in the English language was Rafael Sabatini (1875-1950). And The Sea Hawk, originally published in 1915, is generally regarded as one of his finest works.

Sabatini was born in Italy. His mother was English and from the age of seventeen he made his home in England. All his books were written in English.

Like his even more famous Captain Blood which came out in 1922) The Sea Hawk is the story of a reluctant pirate. The Tressilian family has a reputation for hot tempers and for morals that could charitably be described as relaxed. The young Sir Oliver Tressilian certainly shares the family reputation, although in his case it’s a little unfair. He is aware of his tendency to anger quickly and he is trying to curb that weakness.

He has an incentive to do so. He is in love with Rosamund Goldolphin. The Godolophins are both neighbours and traditional enemies of the Tressilians and Rosamund’s unstable brother Peter hates Sir Oliver with a passion. Sir Oliver is determined not to be provoked by the impetuous youth. He has sworn to Rosamund that Peter will never meet with harm from him.

His good intentions are to no avail. When Peter Godolphin is found dead of a sword thrust the general assumption is that Sir Oliver was his slayer. Even Rosamund believes this. He is in fact innocent, but is trapped between family loyalty and self-interest and is unable to convince her that he is guiltless. And his troubles have only just begun. He is treacherously kidnapped and finds himself at sea, and worse soon follows. The ship is taken by the Spaniards, and this being the late 16th century, the age of Queen Elizabeth, being taken by the Spaniards is very bad news indeed. Particularly in light of the fact that Tressilian has in the past been involved in maritime adventures that the Spanish are inclined to regard as being simple piracy.

Tressilian is sentenced to the galleys, but help comes from an unlikely quarter. His galley is captured by Moslem corsairs. Sir Oliver decides that being a Christian hasn’t done him much good and is easily persuaded to adopt the Moslem faith. This proves to be a very good move. Like many another Christian renegade he adapts quickly to life as a Barbary corsair and within a few years is the right-hand man to the Basha of Algiers. Sir Oliver Tressilian is now the famous Moslem corsair Sakr-el-Bahr, the Sea-Hawk. Piracy is a profession for which he has a true gift.

He believes he has shaken off his past, but it will come back to haunt him in unexpected ways and he will face some very difficult choices.

And of course he will have many adventures on the way.

Sir Oliver is a wonderful larger-than-life character. He is a flawed hero, or perhaps an heroic villain, but either way he’s entertaining and likeable. He is in fact a classic swashbuckling hero but with a dark side.

Sabatini tells his colourful tale with a great deal of flair. The plot is quite intricate and although it relies rather a lot on coincidence this is one of the conventions of this type of fiction. The lives of heroes are guided by fate, after all.

Immense fun, highly recommended.
Posted by dfordoom at 5:37 AM