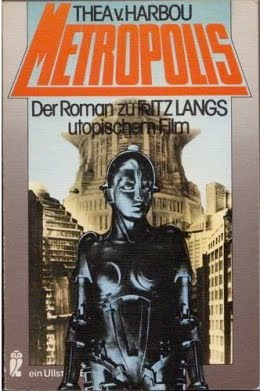 Thea von Harbou is best known today as the wife of the great film director Fritz Lang and his close collaborator on most of his early German masterpieces. She not only co-wrote the scripts, she also turned several of them into novels, including perhaps the most famous of all, Metropolis.

She had in fact written several novels prior to her marriage to Lang and had been an actress as well. While Lang left Germany in the early 30s von Harbou remained and her career in the wartime German film industry is rather controversial.

The city of Metropolis is dominated by the will of Joh Fredersen. This is a vision of a city of the future, a city of machines. The machines require people to operate them, and the machines consume their operators. Their appetite is limitless. There is an underground city beneath Metropolis which provides the machines with the human they require. The upper city is a kind of playground for the rich, with sex and drugs being the main item on the menu.

Joh Fredersen is not a particularly happy man. His wife died giving birth to his son Freder. He had stolen his wife from his friend Rotwang, the inventor of genius largely responsible for the construction of the city. Joh Fredersen becomes alienated from his son when Freder discovers what the machines are doing to people. Freder meets a woman named Maria, a charismatic leader who offers the oppressed of Metropolis hope for change. Those who run Metropolis are its head. Those who work the machines are Metropolis’s hands. To mediate between the brain and the hands a heart is needed, and she tells them a mediator will arise who will fulfill that function.

Maria wants peaceful change but once revolutions are set in motion violence and destruction inevitably follow.

There is also a false Maria, a robot created by Rotwang. Rotwang has his own agenda in regard to the future of Metropolis.

It’s many many years since I’ve seen the movie so it’s difficult for me to compare the book and the movie. What does strike me about the book is the extent of the religious imagery. While the story can be (and has been) seen as a critique of capitalism I’m inclined to see that as a very simplistic explanation. The novel at least seems to me to reflect a horror of revolution, doubtless a reaction to the brutality and viciousness of the Russian Revolution. While the machines are monsters devouring human beings, von Harbou depicts the mob violence inseparable from revolution as being even more monstrous.

Freder certainly seems to be a Christ figure, with Maria being perhaps both the Virgin Mary and John the Baptist. Whatever von Harbou’s religious beliefs may have been Lang was certainly a Catholic, and identified himself as such throughout his life. The quite overt Catholic themes may therefore have originated with him. Lang and von Harbou had co-written the screenplay so that while the novel was von Harbou’s work alone it’s likely that these Catholic themes were carried over from the movie.

Much of the impact of the movies comes from the extraordinary visuals but von Harbou does an effective job in conveying the character of Metropolis by purely verbal means.

There’s perhaps just a touch more sentimenality in the novel than I recall from the film.

The movie’s status as one of the great dystopian science fiction tales is secure. Thea von Harbou’s novel deserves to be recognised as an important work of science fiction in its on right. It’s also a relatively rare and therefore interesting example of German science fiction. Recommended.
Posted by dfordoom at 7:08 AM