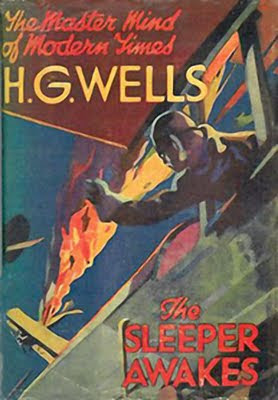 The Sleeper Awakes is one of H. G. Wells’ lesser known science fiction novels, and a rather odd dystopian tale.

In 1897 a man named Graham is having trouble sleeping. When he finally does fall asleep it’s for a very long time indeed. 203 years, in fact. When he awakes he discovers that his long sleep has made him a figure of vast importance.

It’s not just that his own not inconsiderable personal fortune has grown like Topsy. He has been left as heir to the fortune, the very very large fortune, of an engineer named Warming. He has accumulated such vast wealth that he is now in practice the owner of the world. The fact that he was sleeping and was not expected to awake was of course rather convenient for his trustees. The Council that administered his wealth was able to exercise supreme power in his name.

But now, in the year 2100, the Sleeper is awake. And that will have dramatic consequences. It will trigger a revolution.

Wells saw the novel as a nightmare vision of the triumph of both capitalism and the city. Wells’ own slightly eccentric socialist views would seem to form the political program of the Sleeper. The Sleeper, who becomes the Master, is not entirely impressed with this future world. And he becomes less and less impressed the more he sees of it. He is also less than happy with those who exercise power in his name, and finally takes the fateful decision to assume direct control, and to complete the revolution.

It’s a decidedly odd book. Graham talks about his democratic ideals but it appears that salvation can only come the actions of one strong individual. Wells seems to have little real faith in the masses. Graham becomes a kind of democratic socialist dictator (something the world would see rather a lot of in the hundred years following the publication of this book).

At the time the book was written no-one had yet been able to build an aircraft that could actually fly but Wells describes aerial battles with considerable vigour and enthusiasm.

It’s a book that’s interesting mostly for the rather confused mishmash of political ideas that it embodies. An oddity, and really of historical interest only. Not to be compared with Wells’ great science fiction novels like The Island of Dr Moreau.
Posted by dfordoom at 10:14 PM