The Grifters, by Jim Thompson 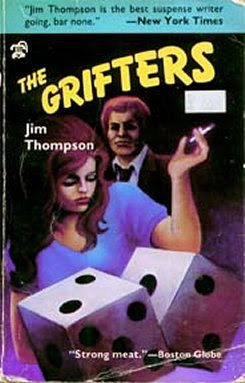 The Grifters, published in 1963, is one of Jim Thompson’s later works. To say anything about the plot would be to risk spoilers, so I’ll just say it’s about a young con-man, Roy, and his mother, who works for a big-time racketeer. While his plotting is extremely skilful the characters matter much more, and in this novel he creates three memorable and exceptionally complex characters. Even the nurse, a relatively minor character, has a depth and complexity you don’t expect in crime fiction.

The descriptions of the various cons are fascinating – Roy is strictly a short-con operator, practising small-scale deceptions that rely as much as anything on confusing the victim so he ends up not even being certain if he’s actually been swindled or not. They’re small-scale cons, but if you’re skilled enough and pull off enough of them you can over time amass a very large amount of money, and Roy is very good indeed at his work. Roy’s mother is also involved in swindling people, but on a larger scale through crooked racetrack gambling operations. Doing this kind of thing for a living puts you into a world where nothing is genuine, where nothing and nobody can be trusted, where duplicity invades every waking minute of your life.

Thompson is also a master of the hard-boiled prose style, and the combination of this and his adeptness at characterisation and his gift for irony would have been enough to make him a very fine crime writer. Thompson adds other elements, however, elements you don’t expect to find in a crime novel. In both The Grifters and The Getaway, the only two Thompson books I’ve read so far, there’s also more than a touch of strangeness. One moment you’re reading straightforward genre fiction, then suddenly it seems you’re into the realm of weird fiction, or (in the case of the ending to The Getaway) even of horror. It’s like a film noir that suddenly turns into an episode of The Twilight Zone. In the case of The Grifters that happens during the brief flashback to the life that Moira (Roy’s girlfriend) led with The Farmer.

In Thompson’s work I get the feeling that the criminal plots and the underworld settings are just a convenient too for a writer who is pursuing other agendas, a writer who wants to take us into some of the darkest recesses of the human psyche. He explores some very dark corners of the soul indeed in The Grifters.

I believe this is considered to be one of his lesser novels. If a book as good as this can be considered a lesser work then I can’t wait to read some of his better stuff! Perhaps even more than Raymond Chandler and Dashiell Hammett this is an author whose novels deserve, indeed demand, to be considered as major works of both literature and pulp fiction.
Posted by dfordoom at 1:16 AM