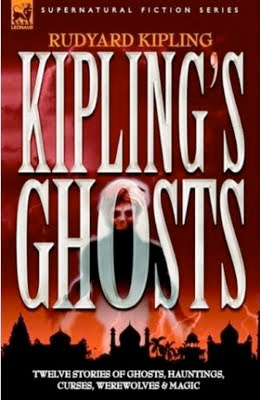 The title of Kipling’s Ghosts is pretty self-explanatory, the book being a collection of twelve ghost stories by Rudyard Kipling.

As was the case with the collection of his science fiction from the same publisher (Leonaur) it might be more accurate to describe these as weird tales or uncanny tales rather than ghost stories, although it does include a few genuine ghost stories.

In many cases the supernatural is merely suggested. Something odd happens, it might be explained as mere coincidence, or fate, or as someone’s belief in their fate bringing it about. But then it might be something supernatural after all.

Most of the stories are set in India, and (as you’d expect) it’s a setting that Kipling uses very skillfully for the purposes of creating an atmosphere of unease, of things being not quite as they should be.

Some of the stories deal with curses, or what might be called magical practices. There are several original variations on the haunted house theme. There’s even a werewolf story.

Kipling always gives the impression that these are not literary productions so much as tales that might be swapped late at night after perhaps a few too many whisky and sodas and that might be true but who can tell?

There are jewels that have magical properties, but only if they are stolen (The Bisara of Pooree). There’s a house that is haunted, but haunted by a suspicion rather than a ghost (The House Surgeon). Thee are tales of madness and guilt (The Phantom Rickshaw) and there are tales of men who have spent too long in India (At the End of the Passage). And there are stories of love that does not end with death.

While I would not describe Kipling as one of the greatest writers of weird tales it’s still a very worthwhile addition to the bookshelves of anyone with a taste for such stories.
Posted by dfordoom at 1:06 AM