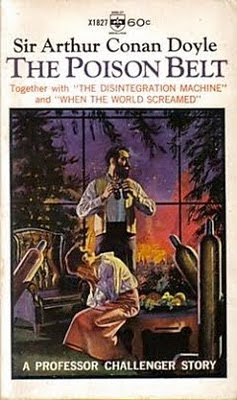 The brilliant but cantakerous Professor Challenger, the hero of Conan Doyle’s classic science fiction tale The Lost World, is one again the central figure in an even stranger 1913 story, The Poison Belt.

It’s typical of Conan Doyle’s science fiction which at times could be very strange indeed.

In 1913 physicists still believed in the ether, a mysterious substance which was supposed to fill the universe. At the time the existence of such a medium seemed to be the only satisfactory way to explain such concepts as gravity and the propagation of light. Physicists could not adequately explain how such forces could operate in a vacuum so therefore they reasoned that the ether had to exist even if it appeared to be undetectable.

In The Poison Belt this mysterious substance suddenly becomes a deadly threat as the Earth passes through a belt in the ether, a belt of poisonous ether. To Professor Challenger it is clear that no animal or human life can possibly survive this encounter. The end can however be postponed by the use of oxygen - if the oxygen content of the air in a confined space (such as a room in the professor’s house) can be increased sufficiently it may be possible to survive for quite a while, and since the end of the world is a matter of considerable scientific interest the Professor intends to witness it. Such an event demands to be recorded by a particularly brilliant scientist and Professor Challenger is not aware of anyone more brilliant than himself.

And given the magnitude of this event it also seems only right that he should invite his companions from the earlier expedition to the Lost World to witness it with him. So Professor Summerlee, the soldier and adventurer Lord John Roxton and reporter Edward Malone are summoned to the professor’s country house.

The earth has already started to enter the poison belt, and reports are coming in from all parts of the globe of the consequences - dramatic behaviour changes followed inevitably by death. It appears that the end truly has come.

Of course there has to be some kind of twist ending and what you fear in a case like this is one of those incredibly annoying “and then I woke up and it had all been a dream” endings. Fortunately Conan Doyle does not inflict that upon us. Whether the ending he does come up with is entirely satisfactory is another matter but it’s still a bizarre and original little story.

All of Conan Doyle’s science fiction stories are worth reading. While the fame of Sherlock Holmes has overshadowed his writings in other genres his contribution to the development of science fiction was immense.
Posted by dfordoom at 6:22 AM