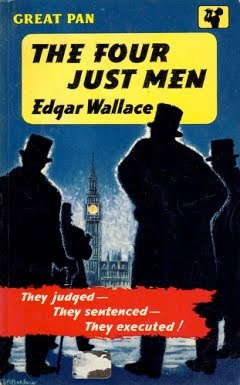 Edgar Wallace achieved overnight success with his first novel in 1905, The Four Just Men. It’s important historically because it effectively created a new genre, the modern thriller. In fact many of Wallace’s crime novels are either thrillers or combine the mystery and thriller genres. The Four Just Men can also be seen as the first of the “wealthy amateur crime-fighters taking the law into their own hands” stories that became such a feature of 20th century pulp fiction and comics. Their use of elaborate disguises even anticipates the vogue for masked avengers.

The Four Just Men of the title have all been victims of injustice and have grown disillusioned with the ability of the law adequately to mete out justice to wrong-doers. They have embarked on a campaign of vigilante justice, acting as both judges and executioners and when the novel starts they have already claimed more than a dozen victims, including crooked financiers, corrupt public servants, political tyrants and even poets (for corrupting the morals of youth).

Their latest target is the British Foreign Secretary, who has introduced a bill into Parliament that would result in the forcible return to Spain of large numbers of exiled dissidents and would-be revolutionaries. They are determined to stop this bill, if necessary by assassinating the Foreign Secretary. Their methods of murder are always ingenious and unconventional, presenting a formidable challenge to Superintendent Falmouth of Scotlard Yard, the man charged with protecting the life of the embattled Cabinet Minister.

Apart from its clever plotting and its effective use of suspense it’s also a surprising subtle and ambiguous novel. While most of the victims of these vigilantes are criminals some are merely political opponents, and the British Foreign Secretary is most definitely not a bad man. If anything he’s a man of great courage and integrity. So are the Four Just men heroes or villains?

Wallace’s popularity as an author was immense, to an extent that makes him the forerunner of the celebrity writers of our own age. No less than 160 movies have been made from his books, more than from the work of any author of modern times. Like all of Wallace’s books this one is hugely entertaining.
Posted by dfordoom at 10:11 AM