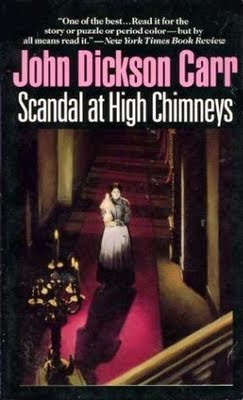 Scandal at High Chimneys, originally published in 1959, is another of John Dickson Carr’s fascinating crime novels set in London’s past. This time it’s 1865, and a shameful family secret had led to murder.

Carr uses the detective novel as a means to explore the hidden underbelly of respectable Victorian England – a world of blackmail, kept women, disreputable night-spots, prostitutes and habitual criminals. He also shines a light on some characteristic Victorian fears – especially the dread of “tainted blood” and the ever-present horror of scandal.

This book deals with much of the same subject matter as Donald Thomas’s The Victorian Underworld but this time in the form of fiction (although it’s fiction based on what appears to be fairly thorough historical research). The novel is also interesting for its account of 19th century policing and law. Behind the façade of scrupulous respectability the world of the Victorians was as much a world of sex, sleaze and passion as our own world, and Carr brings this world vividly to life. And it’s all great fun.

Incidentally, the ex-inspector of police, Jonathan Whicher, who plays such an important role in the book really did exist, and really did work as a private detective after being forced out of Scotland Yard.
Posted by dfordoom at 8:35 AM