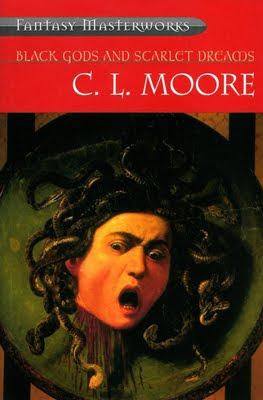 The pulp magazines of the 1920s and 1930s attracted some fascinating writers. One of the best and most interesting, and certainly the most unfairly neglected, is Catherine L. Moore. Her sword and sorcery stories featuring Jirel of Joiry (kind of an early version of Xena Warrior Princess) are among the best in that sub-genre.

She also wrote many stories recounting the adventures of Northwest Smith. Although they take place on other planets and involve space travel they really belong to the sword and sorcery (or sword and planet) sub-genre as well.

There’s very little action in her stories, but lots of atmosphere, and some wonderfully inventive and very creepy ideas. There are no conventional vampires in any of her tales, but there are countless variations on themes of vampirism.

Her Northwest Smith stories published in the 30s are perhaps not quite so well-known as her Jirel of Joiry stories.

In Scarlet Dream Northwest Smith finds himself in a dreamworld as a result of looking too closely at a strange pattern on an alien fabric. In Dust of Gods he finds himself searching for the mortal remains of a god. Lost Paradise is a classic time travel story, and it’s also a story of loss, of the unbearable sadness that time travel can involve. Julhi is one of her many vampiric stories, in which dimensions collide and intersect and let loose a creature that is both terrifying and tragic. Black Thirst is one of several superb science fictional vampire stories she wrote.

The Jirel of Joiry stories are among the best sword and sorcery tales ever written. Many are very dark indeed, verging on horror. The Black God's Thirst is especially fine.

The Gollancz Fantasy Masterworks collection of her writings, Black Gods and Scarlet Dreams, includes all the Jirel and all the Northwest Smith tales.

A fine writer whose work deserves to be much better known than it is.
Posted by dfordoom at 5:20 AM