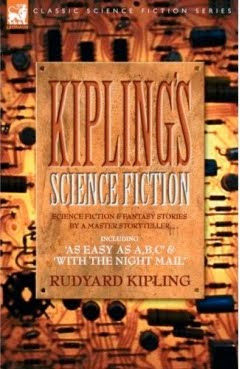 When we think of early science fiction writers Rudyard Kipling is not exactly the first name that comes to mind. But Kipling did indeed write science fiction, and he was surprisingly influential. Nine of his science fiction tales can be found in the collection Kipling's Science Fiction published by Leonaur.

His reputation as an SF writer rests mainly on two very interesting stories, both set in the same SF universe. With the Night Mail: A Story of 2000 A.D. was written in 1905; As Easy as ABC in 1912. Powerful high-speed dirigible airships fill the skies. Air transport has become so important that an international body was established to regulate it, the Aërial Board of Control (the ABC). And as air transport grew further in importance the ABC’s power expanded to the point where it became a de facto world government.

In theory the ABC still exists merely to regulate air traffic, but its charter contains the fateful words “and all that that implies.” This effectively allows the ABC to control everything.

English power had traditionally rested on a combination of sea power and commerce and Kipling has drawn the obvious conclusion that in the future air power would be the key to political power, but with the ability to effectively eliminate national frontiers and therefore making political power a global rather than a national affair. It’s a rather clever premise. Anything that might be construed as a threat to air traffic is suppressed. This includes democracy. And the press. War has been more or less outlawed as tending to interfere with air traffic. The ABC has established a kind of Pax Aeronautica, but at a price - the loss of any and all political freedom.

Just as interesting as the ideas is the style. With the Night Mail is written in a lively journalistic style and Kipling came up with an ingenious method of world-building. Rather than including a large mount of exposition and background information in the story itself he published the story as if it had appeared in a magazine of the future, surrounded by brief news stories, announcements and advertisements which serve the purpose of filling in the background.

Kipling was certainly very strong in the area of relating technological developments to political and social developments and that is enough to make him an important figure in the history of the genre.

The other seven stories in the collection stretch the definition of science fiction a little, but they’re perhaps even more interesting for that very reason.

The Eye of Allah is particularly good, a “what if” story based on the idea that the secret of the microscope reaches Europe from the Arabs several centuries before that invention actually appeared in Europe. A group of monks must decide if the invention will be a benefit or a curse to mankind.

In A Matter of Fact a number of journalists witness an extraordinary occurrence while on a sea voyage, but can even a journalist persuade the public to believe something as strange as this?

Kipling was fascinated by technological developments, but in an interesting way, seeing mechanical devices such as steamships and railway locomotives as a form of machine life, possessing a kind of machine soul. The collection includes several stories along this line.

The final story, Wireless, is ostensibly about the first experiments in radio but Kipling uses this as the springboard for speculations about the transmission of thoughts and even of poetic inspiration.

This collection demonstrates that Kipling was not just an interesting writer of tales with a science fictional edge but that he was a master of the kind of genre-crossing writing that almost a century later was to labelled slipstream. Kipling of course had the advantage of not having to worry about genre since it didn’t exist as such at the time.