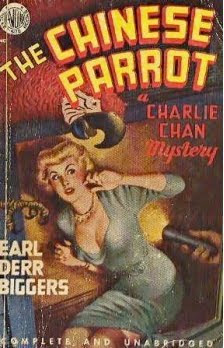 The Chinese Parrot, published in 1926, was the second of Earl Derr Biggers’ Charlie Chan mysteries and was even more successful than its predecessor.

I was in some ways a little disappointed that this one, unlike The House Without a Key, wasn’t set in Hawaii. 1920s Honolulu was such a cool setting. There are compensations however. Charlie Chan himself moves more to centre stage in this second book and becomes a more vivid and more complex character.

The structure is interesting. At first there’s no evidence that any crime of any sort has been committed. Just a vague sense of things being not quite right, a feeling that slowly grows into a fairly strong conviction that dark deeds really are afoot but still without anything resembling proof. And even then, even if a crime may have been committed, exactly what was the crime?

Detective-Sergeant Charlie Chan of the Honolulu Police has been looking forward to visiting the mainland US for years. He finally gets the opportunity, and decides to combine a vacation with a favour for an old friend. Forty years earlier Sally Phillimore had been the most sought-after heiress in Hawaii. Now she is broke, thanks to reckless investments by her much loved but hopelessly irresponsible son.The only way to retrieve the family fortunes is to sell the fabulous Phillimore pearls.

Another old friend of Sally’s, Alexander Eden, is a successful jeweller in San Francisco. He has a buyer lined up, the wealthy financier P. J. Madden. Charlie Chan’s job is simple. All he has to do is to escort the pearls from Honolulu to San Francisco. Eden’s son Bob will pick up the pearls from the dock. The handover does not go smoothly however - Bob Eden spots a suspicious looking character who seems to be shadowing him. This is the first faint sign that perhaps the transaction is not going to be straightforward. When Charlie Chan and Bob Eden agree to deliver the pearls to P. J. Madden’s desert ranch just outside a town named Eldorado they spot further disquieting signs that all is not quite as it should be.

Charlie Chan’s instincts tell him that perhaps something is very wrong indeed, and the affair of the parrot adds further to the sense of unease. To reveal any details at all of the plot from this point on would spoil the fun as Biggers skillfully weaves a series of small incidents into a fiendishly complicated web of intrigue and mystery.

As in the first novel Biggers has fun mocking racial stereotypes, but he does it with such a lightness of touch that you never have the uncomfortable feeling of being preached to. The anti-racist message is subtle but effective.

There are colourful supporting characters and there’s a love interest in the shape of Paula Wendell, a location spotter for the movies (the sleepy desert town of Eldorado is about to be invaded by a Hollywood film crew, a fact which will also have an unexpected bearing on the plot).

It’s all great fun. The Wordsworth Charlie Chan Omnibus includes the first three novels involving the redoubtable Chinese detective from Honolulu (based on a famous real-life model) and I recommend it very highly.