The Moonstone by Wilkie Collins 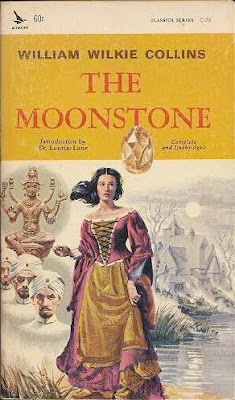 The Moonstone, published in 1868, occupies an important place in the history of the crime novel. Wilkie Collins certainly didn’t the invent the detective story, but he was one of its earliest exponents and the huge success of his “sensation novels” such as The Woman in White and The Moonstone helped to create the market for this genre, and thus contributed to the detective fiction boom of the late 19th century.

The Moonstone is more than just a crime story. Collins combines his mystery with some social satire and some pertinent observations on subjects such as colonialism and the position of women. The book opens with the theft by an English army officer of a fabulous diamond from an Indian shrine. The diamond is not destined to bring happiness either to the man who originally stole it or to the members of his family to whom it is subsequently passed on, and the Brahmins charged with recovery of the stone are determined to get it back even it takes them decades to do so. The jewel is bequeathed to young Rachel Verinder, but on the very night when her cousin Franklin Blake presents her with it the moonstone mysteriously disappears.

The unravelling of the mystery takes place in a typically leisurely 19th century style, but the writing is so witty and so entertaining that there’s never any danger of boredom. The cast of colourful subsidiary characters also helps to maintain interest.

The structure of the novel is fiendishly complex, with multiple narrators and multiple points of view, but Collins draws the threads together with great skill. The very different personalities of the various narrators (such as the religious fanatic Miss Clack, the ageing but brilliant police detective whose real passion is roses rather than crime and the family steward who firmly believes that the answer to every problems can be found in the pages of Robinson Crusoe) and their very different perspectives on the case also add to the interest. Collins has a great deal of fun at the expense of the truly appalling Miss Clack! The unfortunate medical man, Ezra Jennings, is one of those wonderful characters who make 19th century English novels worth reading.

The solution to the mystery is suitably ingenious and the ending is exceptionally satisfying. A marvellous book, and not just for fans of crime fiction.
Posted by dfordoom at 4:17 PM