A. Merritt's Seven Footprints to Satan 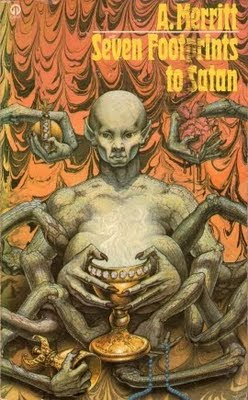 Published in 1927, Seven Footprints to Satan is part horror, part adventure and part crime novel. A bit like a combination of Fu Manchu and Indiana Jones.

It involves an intrepid explorer who finds himself ensnared by a diabolical criminal mastermind who calls himself Satan. The seven footprints of the title are a wonderful idea – they’re the footsteps of the infant Buddha, some of which were turned to evil, and they form the centrepiece of a cruel but ingenious game by which Satan’s victims can escape his clutches, or become his servants forever.

There’s much more to the idea than my brief summary would indicate, and I think it’s a delightfully clever idea. The book combines suspense and romance, and packs an enormous amount of fun into a mere 224 pages.

If he’s remembered at all these days Abraham Merritt (1884-1923) (usually known simply as A. Merritt) is remembered for his 1924 fantasy classic The Ship of Ishtar. His other books though are definitely worth checking out. His stories are classic pulp fiction but delightfully written and highly inventive.

This is the third book of Merritt’s that I’ve read, and they’ve all proved to be highly original and sparkling entertainment.
Posted by dfordoom at 9:59 PM