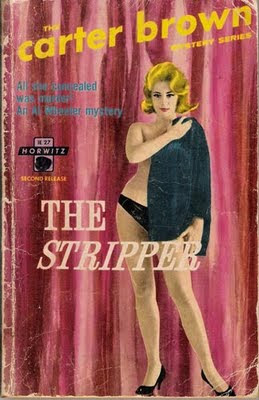 Carter Brown (whose real name was Alan Geoffrey Yates) may well be the biggest-selling Australian author of all time, with sales reckoned in the tens of millions or possibly even hundreds of millions. He was also one of the most prolific writers in history, with 317 novels to his credit.

He was born in Britain but moved to Australia in 1948 and became an Australian citizen. He wrote in most pulp genres but is best known for his crime novels. They were set in the US but this was a US that the author only knew from movies and books. In some ways this makes them more fun.

He was rather similar to the British crime writer Peter Cheyney in that he enjoyed immense success in Europe. He was not quite so successful in the United States but still managed to sell a lot of books there. He also resembled Cheyney in his distinctly tongue-in-cheek approach to the hardboiled genre.

Police detective Al Wheeler, working for the Sheriff’s department in a fictional California town, was one of his most popular heroes. The Stripper combines a lurid title with equally lurid subject matter. An apparent suicide leads Wheeler to a burlesque joint and a lonely hearts club. A girl called Pattie Keller jumps to her death from an office building but the strange thing is she’d already decided not to jump when she seemed to fall. And a huge quantity of a powerful analgesic is found in her body, a quantity sufficient to cause extreme nausea and dizziness. The death starts to look potentially suspicious.

Pattie’s sister is Deadpan Dolores, a famous and very successful strip-tease artiste. Pattie had been a member of a lonely hearts club and when it turns out that both the dating agency and the burlesque club are owned by the same person Wheeler decides this is too much of a coincidence.

Pattie’s last date arranged by the agency had been with a shy awkward florist but then Wheeler spots the florist in the burlesque joint doing some serious partying with two very glamorous strippers. The investigation will lead Wheeler to a white slaving racket. It will also lead him to the beds of a assortment of beautiful women. Al Wheeler has no problem combining business with pleasure.

There’s plenty of delightful hardboiled dialogue and a certain amount of sleaze. This is not a story we’re mean to take too seriously. The emphasis is on fun. Like Cheyney’s books it treads a fine line between light-hearted crime action and outright parody. It’s all very very pulpy and highly entertaining.
Posted by dfordoom at 5:05 AM