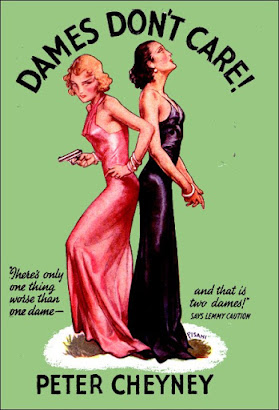 Peter Cheyney (1896-1951) was an English criminal investigator turned crime writer who enjoyed immense success in the late 30s and the 1940s. His Slim Callaghan books were very popular but he achieved his greatest success with his Lemmy Caution novels, beginning in 1936 with This Man Is Dangerous. Dames Don’t Care, published in 1937, was the third of the Lemmy Caution books.

Cheyney’s hero became even more popular on the Continent when the French made a series of successful (and incredibly entertaining) Lemmy Caution movies, including a 1954 film version of Dames Don’t Care.

Cheyney’s aim with the Lemmy Caution tales was to write fast-paced American-style pulp thrillers. Cheyney was English but he figured he could get away with making his hero an FBI agents and setting the stories in America. And he was right. Of course I’m sure that American readers would have spotted all sorts of mistakes about American police procedures and in the use of American slang. It doesn’t matter. This is not the real America. This is the America of gangster movies, dime novels and detective magazines. It’s a fictional world and like most good fictional worlds it’s more fun and more outrageous than the real world.

Dames Don’t Care starts in Palm Springs, with Lemmy investigating a counterfeiting case. It soon becomes a murder case as well, and there’s another sudden death that now looks might suspicious as well so even at this early stage it could be a double murder case.

Naturally there’s a dame in the case. In fact there are two. This worries Lemmy. He likes women but you never know what they’ll do next. Both these women are beautiful and glamorous. One of them may be no good. Both of them may be no good. At least Lemmy knows how to handle guys who are no good - he slugs them or shoots them. With dames that’s not always an option. He does consider giving one of them a spanking but decides against it, even if she did try to shoot him.

The action takes place partly in the U.S. and partly in Mexico. Lemmy has no jurisdiction in Mexico but that’s not going to stop him. Lemmy is not exactly a stickler for correct procedure, a fact that becomes increasingly apparent as the story progresses.

The plot is complicated, with several plausible suspects and alibis that might be phoney, or they might be supposed to look phoney. The first clue is two hundred thousand dollars’ worth of counterfeit bearer bonds that one of the dames (named Henrietta) tried to pass. Maybe she knew they were counterfeit and maybe she didn’t. Henrietta is mixed up in a romantic triangle only it’s not a triangle it’s a quadrangle and it’s not clear who is doing the betraying and who is being betrayed. Maybe they’re all betraying each other. This might be a world of no-good dames but it’s also a world of no-good punks. The men and the women in this story are equally dangerous and equally treacherous.

Lemmy Caution is as fast with his wisecracks as he is with his fists. It’s a fairly violent tale but it’s a book that aims to deliver entertainment and Cheyney mixes plenty of humour in with the tough guy stuff.

Cheyney does a decent job of keeping us in doubt as to the identity of the murderer. Most of the characters are up to no good but they’re not all capable of murder. It’s just that Lemmy can’t decide which ones actually are capable of murder. And those two janes have more than murder on their minds as well - they both try to seduce our hero. Lemmy has to admit that they’re both swell-looking gals.

Lemmy gradually puts the pieces together but if he’s goings to make the charges stick he’s going to have to be devious. That’s OK, because Lemmy Caution has brains as well as brawn. Lots of criminals have made the mistake of thinking he’s all brawn.