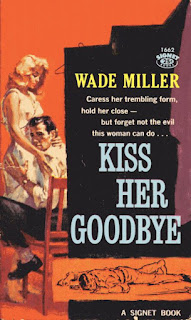 Wade Miller’s Kiss Her Goodbye was published in 1956. Wade Miller was actually the two-man writing team of Robert Wade (1920-2012) and Bill Miller (1920-1961), friends since childhood who wrote thirty-three novels together between 1946 and 1961. They wrote under the name Wade Miller and several other pseudonyms. They’re perhaps best-known for Badge of Evil (the basis for the Orson Welles film noir classic Touch of Evil) and Kitten With a Whip (also memorably filmed).

Brother and sister Ed and Emily Darnell are driving through the desert and Ed is jumpy. He thinks they may be pursued. But maybe the guy isn’t going to press charges. If only he could get hold of a Bakersfield paper he’d have some idea if they really need to worry or not. Ed wants to push on to Barstow but Emily is tired so they stay at a motel in a little town called Jimmock. Ed wishes the manager wasn’t so nosy. And he wishes men would stop looking at Emily. There’s not much chance of that. Emily, just turned eighteen, is the kind of girl men do look at.

So we have a pretty fair idea of what’s probably going on. This is going to be another criminal couple on the run story. Maybe they pulled a heist in Bakersfield or maybe Ed beat up some guy (or maybe even killed some guy) for taking too much interest in Emily.

If these are our assumptions we are in fact totally wrong. This is not that kind of story. Ed and Emily are not criminals. They’re also not on the run from criminals. They are running, but what they’re running away from is something quite different. I’m not going to reveal what they’re running from or why, even though we find out quite early on, because the book works better if we start off having no idea what’s going on.

Ed and Emily decide that Jimmock is as good a place as any to start a new life. Maybe things will work out this time. It’s a nice enough town. The motel room isn’t that great but the manager, Tubbs, makes them an offer. They can stay there permanently. Tubbs is just managing the place for the bank. The bank is stuck with the place, it doesn’t make any money for them, but Tubbs likes Ed and Emily. Ed gets a job. Emily wants to get a job as well but Ed knows that would be a bad idea. The job is a good one but Ed is a bit worried by his boss.

Tubbs comes up with an ever better ideal. The bank is so desperate to unload the motel that they could buy it - Tubbs, Ed and Emily. The bank would take just about any offer. It all seems like it’s going to work out this time. Then the thing that happened in Grand Rapids and Bakersfield happens again, as Ed always knew it would. 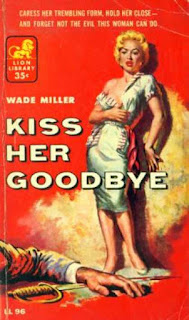 As I’ve said in other reviews the weakness of a lot of noir fiction is the lack of any even vaguely sympathetic characters and an excess of nihilism. None of that applies to Kiss Her Goodbye. This book has characters we can really care about. They’re very flawed and they make dumb mistakes but they try really hard not to mess up their lives and they’re actually very likeable. This book is unusual in being noir fiction without any villains. There’s not a single character who could be described as evil. Bad things just happen because that’s the way things go sometimes.

Of course this is noir and there’s a palpable sense of doom. Sometimes you just can’t beat the odds. But you have to try. There’s always hope. If you don’t have hope you’re already dead. And there is love. Maybe it’s unconventional love, maybe it’s not healthy, but any kind of love is better than nothing. And there’s a certain nobility in love against the odds. Noir fiction can be sleazy and can have a tendency to wallow in the gutter. But this is not ordinary noir fiction. Wade Miller didn’t write ordinary noir fiction. Too often in noir fiction you’re just watching losers lose because that’s what losers do. The characters here are people who don’t deserve to be losers. They’re vulnerable people but they’re vulnerable through no fault of their own. Maybe they don’t play the cards that fate has dealt them all that well, maybe they deserved better cards, but the reader desperately wants them to end up OK. Whether they do survive is something you’l have to find out for yourself.

It’s a book that packs a real emotional punch.

I’ve been deliberately extremely vague about the plot which is perhaps unnecessary. If you read the blurb at the beginning you’ll discover a lot more about the plot than I’ve revealed. I went into the book having no idea what to expect and personally I think it works better that way.