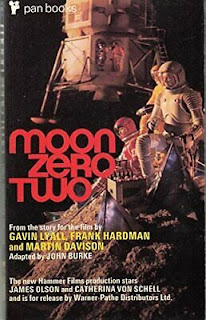 John Burke’s Moon Zero Two is a novelisation of the obscure but extremely interesting 1969 Hammer science fiction movie of the same name. The movie was an expensive project for Hammer and it bombed at the box office. Which is a pity because it’s not a bad movie at all. One of the credited writers on the movie was Gavin Lyall and regular readers of this blog will know that I regard Lyall as one of the best thriller writers of the 60s and 70s (he wrote some superb aviation thrillers including The Most Dangerous Game and Shooting Script). And Moon Zero Two does have much of the same feel as Lyall’s aviation thrillers.

The novelisation came out in 1969.

Moon Zero Two takes place on the Moon half a century after the beginning of lunar exploration. The great age of space exploration is over. Now the big corporations control everything. There are tourist hotels on the Moon. It’s no place for bold space explorers any more. Which is a problem for the narrator, Bill Kemp. It’s a problem because Bill Kemp is by nature a bold space explorer. In fact he was the first man on Mars. Now he pilots a beat-up barely spaceworthy lunar ferry, the Moon Zero Two. He could easily get a job as a spaceliner pilot for the Corporation but that would mean giving up and accepting the new corporate world and Bill Kemp is just not the sort of guy who can do that. Piloting the Moon Zero Two is dangerous and pays badly but he’s his own boss.

Or at least he’s his own boss until the space agencies start making noises about declaring the Moon Zero Two unspaceworthy.

Then along comes a fabulously wealthy businessman named Hubbard with a proposition. Hubbard needs a space pilot (preferably one who doesn’t worry too much about regulations) to crash-land a small asteroid on the Moon. Why? That’s simple. The asteroid in question happens to be six thousand tons’ worth of pure gem-grade sapphire. It’s all highly illegal but potentially very profitable and that’s the sort of deal that appeals to Hubbard. It doesn’t appeal to Bill Kemp until Hubbard makes him an offer he can’t refuse - a brand new space ferry. 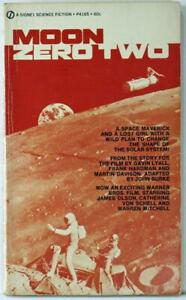 Adding complications to Kemp’s life is a girl who is looking for her missing brother Wally (a lunar miner on the Farside). One of the lunar communications satellites is down so at present there is no contact with Farside. The girl Clem, wants Kemp to help her to find Wally.

Kemp is already in trouble with the Bureau of Investigations in the person of Agent Liz Murphy. He’s having an affair with Liz and you might think that would be to his advantage but it isn’t. It makes things worse. Love affairs can be complicated.

There’s adventure and danger in space and on the lunar surface. There’s a plot that is a bit more complex than it initially appears to be. There are romantic entanglements. And there’s murder.

Hubbard is the kind of villain the reader will love to hate, motivated by power and greed but even more so by ego. Kemp is an effective enough hero. He’s not especially complex but he’s likeable. He’s just a guy who doesn’t like being pushed around and he quickly discovers that working for Hubbard involves lots of being pushed round.
Clem is a good heroine - she’s plucky but she’s also rather cynical. She’s worried about her brother but she’s also worried about getting back the money that he borrowed for his hare-brained mining venture on the Moon. She’s a practical kind of girl.

There are some hard science fiction elements as well as the space adventure stuff. This isn’t a dazzling piece of science fiction but it’s very entertaining (as is the Moon Zero Two movie). Recommended.
Posted by dfordoom at 5:04 AM