The Citadel of Fear 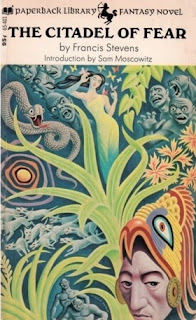 Gertrude Barrows Bennett (1884-1948) had a very brief career writing for the pulps from around 1917 to around 1919. At the time her work was widely praised by luminaries such as A. Merritt. Most of her fantasy/science fiction/weird fiction was published under the pseudonym Francis Stevens. She seems for some reason to have stopped writing in 1919. After that she disappears into complete obscurity. Until recently even the date of her death was unknown.

Two prospectors, a tall Irishman named Colin O’Hara (usually known as Boots) and a man named Kennedy, are lost in the desert somewhere in Mexico. Just when it looks hopeless for them they stumble upon a hidden valley. There’s not supposed to be any trace of civilisation anywhere in the vicinity but here is a fertile valley full of cultivated crops and a large hacienda.

There is something slightly odd about all this. The owner of the hacienda is not Mexican but a Norwegian-American and he gives the impression of being just a trifle secretive.

In fact the two prospectors haven’t just stumbled into a hidden valley, they have discovered a whole lost civilisation. A Pre-Columbian Mesoamerican culture, with vast temples and cities. And (of most interest to Kennedy) gold. This is the legendary land of Tlapallan. And they’ve also blundered into a power struggle between the priests of Quetzalcoatl and the priests of Nacoc-Yaotl.

While Kennedy is interested in the gold O’Hara is more interested in the moth girl. What gets Kennedy into trouble is not the gold but witnessing a religious ritual, something forbidden to outsiders. What gets O’Hara into trouble is a combination of his fascination for the moth girl, his natural chivalry and his impetuosity. These two outsiders could unwittingly start a civil war. A civil war that could involve gods taking sides.

There are some nice touches to this lost world, such as the lake. I won’t spoil things by telling you what’s strange about the lake. And the light is strange too. As in the best examples of this genre the author creates a lost world that really does feel odd and alien.

It’s only the first half of the story that takes place in Mexico. Then the scene switches to the United States, many years later, but the story is far from finished. There are monsters loose. Are they human or animal or maybe even supernatural? And there’s another strange other-worldly girl. Not the moth girl, but with the same ethereal beauty and the same oddness. She’s quite mad. At least that’s what O’Hara is told. He doesn’t seem to care, although he doesn’t really know why he’s drawn to her. Is there some memory at the back of his mind?

The latter part of the story, even without the exotic setting of the first half, has plenty of strangeness and it gets stranger. O’Hara has no idea why he has suddenly become caught up in such inexplicable and disturbing events. Again there’s an ambiguity - is this story science fiction or fantasy? Is O’Hara dealing with gods or men, with monsters or ghosts or science gone very very wrong?

He’s certainly dealing with evil, and possibly madness. A house of secrets which should have stirred some memories but perhaps not his memories.

There’s plenty of danger and action (this is after all pulp fiction), there’s some romance with a touch of weirdness and there’s some fairly visceral horror. There is at times just a slight Lovecraftian tinge although at this stage Lovecraft had only just started his weird fiction writing career so it’s more a case of Bennett and Lovecraft responding to similar literary influences.

The Citadel of Fear is a fine example of the lost world genre and it’s not surprising that it attracted the admiration of A. Merritt who would in the ’20s and ’30s explore similar territory. Highly recommended.
Posted by dfordoom at 4:25 AM