I’ll Say She Does! by Peter Cheyney 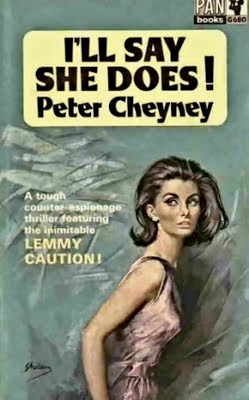 I’m quite a fan of the French Lemmy Caution movies of the 50s and early 60s. They were based on books written by British crime writer Peter Cheyney.

Published in 1946, I’ll Say She Does! was apparently the last of the Lemmy Caution novels. The title character is an American FBI agent whose cases always seemed to take him to Europe. This had the advantage of allowing Cheyney to make his hero a hardboiled American action hero while making use of more familiar European settings.

In this novel, set just after the end of the Second World War, Caution is investigating the theft of secret State Department documents. The formula is pretty much the same as in the movies - lots of hardboiled dialogue, intricate and somewhat unlikely plots, lots of double-crosses, a mix of crime and international intrigue, lots of glamorous but no-good dames. Lemmy Caution is a good field agent, but his real passions are for whiskey and dames. Especially glamorous but no-good dames.

Cheyney’s style is about as pulpy as you can get, but it works well enough assuming that’s the sort of thing you like. Lemmy Caution is a likeable, cheerfully cynical and colourful hero. The pacing is frenetic, and while Cheyney’s prose may lack polish it communicates breathless excitement fairly well.

Cheyney was extremely popular during his lifetime (he died in 1951) and the Lemmy Caution books and movies had a huge following in France right up to the 60s, but he’s now faded into obscurity. Which is a pity, because I’ll Say She Does! is pulpy fun.
Posted by dfordoom at 6:09 AM