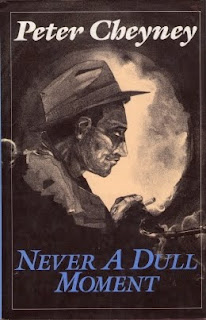 Peter Cheyney’s 1942 potboiler Never a Dull Moment was one of the novels featuring his most popular hero, FBI Chief Agent Lemmy Caution.

They enjoyed huge popularity in Cheyney’s lifetime, and maintained this popularity in Europe at least until the 1960s thanks to the very successful French Lemmy Caution movies starring Eddie Constantine. They’re now all but forgotten. It’s a bit puzzling that they haven’t developed more of a cult following. They’re so deliciously trashy and pulpy and the hard-boiled dialogue is so overdone. Everything is so overblown it almost becomes high camp but it remains great fun.

As usual Lemmy is investigating crimes taking place outside the US. For an American FBI agent he seemed to spend remarkably little time in the US. Given that Cheyney was an Englishman it’s understandable that he preferred to have his hero operating in familiar surroundings. This gives the novels a kind of early transatlantic flavour.

A woman named Julia Wayles has been kidnapped in the US and taken to England. Although no-one is sure if she’s really been kidnapped. She’s being held by a couple of American mobsters named Rudy Zimman and Tamara Phelps. But no-one is sure if this is the real Tamara Phelps or not. And the Rudy who first turns up is not the real Rudy. There’s also an American woman named Mrs Lorella Owen but she’s probably not really Mrs Lorella Owen. It’s that kind of incredibly convoluted plot but it suits Cheyney’s rather tongue-in-cheek approach to the hard-boiled genre.

There are lots of dames in this book, and they’re all dangerous. In Lemmy Caution’s world dames are always dangerous. Well the fascinating and beautiful ones are dangerous and they’re the only ones Lemmy is interested in. There are few things in life that Lemmy likes as much as dangerous women. Men on the other hand are either lousy two-bit punks or they’re swell guys. Lemmy handles lousy two-bit punks just as adeptly as he handles dangerous no-good dames.

And as usual the crime that Caution is investigating turns out to be more than just everyday crime. There’s an element of espionage and intrigue. Entertaining lightweight fun pulp fiction.
Posted by dfordoom at 7:55 PM