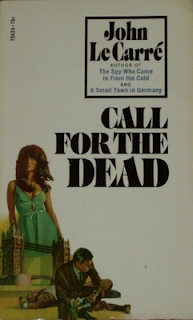 Call for the Dead was John le Carré’s debut novel (appearing in 1961) and it also introduced his most famous character, British spymaster George Smiley.

I’ve read most of the Smiley books and I now realise I probably should have read this one first. It provides a fairly detailed backstory for Smiley, telling us a great deal about how he was recruited as a spy, his wartime career as a field agent and his unfortunate marriage (a marriage that probably did more to form his personality than anything else).

Call for the Dead opens with a very routine assignment for Smiley. Samuel Fennan has recently been promoted to a senior position in the Foreign Office with access to top secret material and he has been accused of having been a Communist Party member in the 1930s. It doesn’t take Smiley long to realise that Fennan is no security risk at all. As he remarks to his superior, half the members of the British Cabinet had been Communist Party members in the 30s. He has no hesitation in clearing Fennan. Case closed. But then Fennan commits suicide and his suicide note claims that he took his life because of harassment by the Secret Service. This puzzles Smiley a good deal. His interview with Fennan had been relaxed and informal and had ended with Smiley reassuring Fennan that he had absolutely nothing to worry about.

Smiley’s boss Maston is in a panic, he will have to smooth things over with the Minister, the Foreign Office is going to be livid and if the press gets hold of it it will all be very unpleasant. He suggests that Smiley have a word with Fennan’s window Elsa. And Smiley becomes more puzzled, especially by the 8.30 wake-up call which makes no sense. Things that don’t make sense worry Smiley and the more he thinks about this case the more things there are that don’t quite make sense.

Smiley puts the pieces together into a coherent whole but he finds that he has several pieces left over which don’t fit anywhere. That just won’t do. George Smiley is a very organised man. He will have to start again.

Smiley is already a fully formed character. His private life is a shambles and he seems like a defeated grey little man but he is a very methodical intelligence agent and he has a very subtle mind. His greatest strength is his interviewing technique. He can break just about anyone and do so politely and without any fuss. People end up wanting to confess to George Smiley.

There are the usual le Carré themes of betrayal. And as usual George Smiley, once a good spy but now a very very good spy-hunter, is quietly remorseless once he’s on the trail of a traitor.

There are no exotic settings here, and no glamour. There are no glamorous women. There’s no sex. There’s some violence, but it’s squalid and messy. Smiley has a gun and at one stage he contemplates taking it with him. Then he thinks of the awful fuss there would be if he actually used it. Smiley doesn’t like fuss so he leaves the gun at home.

This was le Carré very deliberately trying to remove all the glamour from spy fiction. His spies are civil servants. The action takes space in semi-detached cottages in suburbia and other very prosaic settings.

Naturally there’s a fair amount of emphasis on tradecraft - the nuts and bolts of how spies actually operate.

The villain is also a typical le Carré villain - there are reasons he does the things he does. He isn’t a villain simply because he is inherently evil. He has believable psychological motivations.

You don’t read le Carré for action and excitement, you read him for the stifling and sordid atmosphere of betrayal, for the insight into the psychology of the spy, for the hyper-realistic feel and as much as anything for George Smiley. This one ticks all the right boxes for le Carré fans and it provides that all-important background on Smiley. Call for the Dead is highly recommended.
Posted by dfordoom at 2:58 AM