Ashenden, or the British Agent 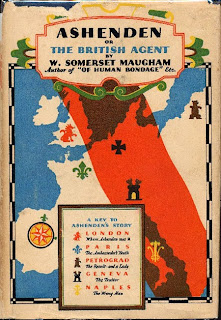 W. Somerset Maugham’s Ashenden, or the British Agent is an example of one of my favourite genres, the early 20th century espionage tale. While spy stories set during World War 2 and during the Cold War have their charms I find the earlier tales set during the First Word War or in the years leading up to that war much more appealing.

Ashenden, or the British Agent, first published in 1928, is a series of linked stories relating the adventures of a writer of comic plays who is recruited into British Intelligence. Maugham himself actually did serve in British Intelligence during the Great War and based these stories to a considerable extent on his own experiences.

The stories in some ways form a kind of episodic novel because we do see some evolution in the character of the hero. In the earlier tales he’s still something of an innocent and still treating the whole affair as a bit of a lark, and is rather shocked when he finds that he intelligence service’s activities include assassinations. In the later stories he has become considerably more hardened.

The tone of the stories varies considerably. Some are gently humorous, some verge on farce, while others have the feel of black comedy. And some are surprisingly dark and cynical, to a degree that you don’t really find again in the spy story until the emergence of writers like John le Carré in the early 60s.

Ashenden is based in neutral Switzerland and is more a spymaster than a spy. He receives his instructions from a senior officer in British Intelligence known only as R. Much of his work is fairly routine, collating reports from his agents in the field. Initially it seems like an amusing sport which can be pursued without getting one’s hands dirty but Ashenden soon discovers that it has a dark side. He finds himself being assigned to work with a mysterious and eccentric Mexican general on a mission to prevent a certain Greek diplomat from handing over some confidential an extremely vital papers to German agents. Ashenden is horrified to learn that his Mexican colleague’s orders are to prevent this from happening by the most simple and direct method - killing the Greek diplomat in cold blood. Ashenden well and truly loses his innocence on this mission.

Other assignments involves some rather nasty double-crosses and Ashenden has to resort  to some very unpleasant methods.

While Maugham certainly shows us the darker side of the world of espionage he avoids making glib or naïve value judgments. Espionage might be an unpleasant occupation at times but sometimes unpleasant things have to be done.

This book was the basis for Alfred Hitchcock’s very underrated 1936 film Secret Agent and it’s remarkable just how closely Hitchcock reproduces the tone of the book, with the same mix of black humour and cynicism, of innocence and cold-bloodedness.

For anyone with even a passing interest in the evolution of the espionage story Maugham’s book is essential reading. It’s witty and highly entertaining with a very dark edge to it, and it's one of the finest works of spy fiction ever written. Very highly recommended.
Posted by dfordoom at 7:41 AM