Mad Monkton and Other Stories 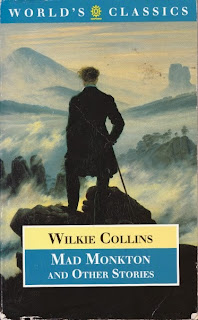 The Moonstone Wilkie Collins (1824-1889) was one of the most popular writers of the “sensation novels” of the 1860s and 1870s. These were in some respects forerunners of the true detective story although they were also heavily influenced by the gothic novel. Collins’ two masterpieces in this genre were The Woman in White (1859) and The Moonstone (1868). Mad Monkton and Other Stories is a collection of his shot stories, mostly dating from before his major commercial breakthrough with The Woman in White.

Mad Monkton, dating from 1855, is the longest story here and it’s one of his best. As its title suggests it’s a tale of madness although as the story unfolds the reader will feel increasing doubts as to whether Monkton is actually mad or whether he really is the victim of a family curse. It’s also a tale of obsession. This is one of Collins’ more gothic tales and its ambiguity makes it exceptionally disturbing and fascinating.

The Ostler (which also saw publication under the title The Dream Woman) is a horrifying tale of a man who has made a very unfortunate marriage indeed. He has driven himself at least half mad with fear, but are his fears warranted or merely a delusion. This is the kind of ambiguity at which Collins excelled.

In The Clergyman’s Confession (also published as Miss Jéromette and the Clergyman) a man was acquitted of murder but an elderly dying clergyman knows far more about the murder than was revealed at the trial.

In The Dead Hand a man finds himself spending the night in an inn with a dead man. But is the man truly dead? A Terribly Strange Bed is one of Collins’ best known stories in the gothic vein, and a very effective little chiller it is. The Lady of Glenwith Grange is a less successful story involving one of the favoured themes of gothic fiction, the double.

The Biter Bit, Who Killed Zebedee? and The Diary of Anne Rodway, both dating from the 1850s, mark important steps in the evolution of the detective story. The Biter Bit also demonstrates the author’s flair for comedy while The Diary of Anne Rodway may perhaps mark the first appearance of the amateur detective, in this a girl who believes her friend’s death was due to foul play. She is determined to see justice done.

A Stolen Letter is clearly influenced by the best of Poe’s detective stories, The Purloined Letter, although Collins gives it his own twist.

John Jago’s Ghost concerns what would today be labelled a very dysfunctional family indeed. The disappearance of John Jago brings matters to a crisis, but is he dead? Is he a ghost? Has there been a murder? It’s another skillful blending of the mystery and gothic genres.

The Captain’s Last Love is the odd man out here, being more of a quirky romantic adventure fantasy which works more successfully than it has any right to do.

This is a collection that neatly demonstrates the author’s considerable importance to both the crime story and the gothic tale, while also displaying the breadth and inventiveness of his writing. The immense success of The Woman in White and (and they are undeniably superb) have unjustly overshadowed his other works. This collection is a fine starting point for anyone wanting to explore his very underrated short fiction. Highly recommended.
Posted by dfordoom at 10:54 PM