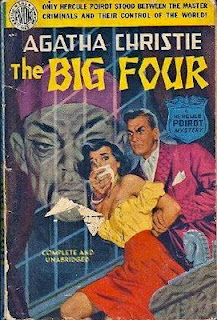 Agatha Christie’s The Big Four is a 1927 Hercule Poirot mystery, only it’s not a mystery at all. What it is is Agatha Christie’s attempt at an Edgar Wallace-style thriller. Given that Wallace was just about the most popular author of the 1920s it’s perhaps not so surprising that Christie tried to emulate him. The results are more successful than you might expect.

Poirot and his friend and colleague Captain Hastings find themselves involved in a case that soon proves to be much bigger than it seemed. They have stumbled upon a gigantic criminal conspiracy by a cabal of diabolical criminal masterminds known as the Big Four.

The Big Four are not only the powers behind many criminal undertakings, they are also involved in international intrigue and even in revolution. Their aims are nothing short of world domination. The fact that the leader of this vast criminal empire is Chinese indicates that Christie was also influenced by Sax Rohmer’s very successful Fu Manchu novels.

The plot is radically different from a conventional Poirot story. It’s rather episodic and some of the episodes allow Poirot to function in his usual crime-solving manner but the main story involves no actual mystery. The structure is that of a pure thriller rather than of a detective story.

And Christie is not afraid to throw in the kinds of touches that you would find in the most outrageous thrillers of that era. One member of the Big Four is a brilliant mad scientist who has developed a kind of death ray based on concentrated radio waves, and is on the verge of discovering the atom bomb.

All this is a very long way indeed from the cases that we are accustomed to see Poirot involved in. The plot is outlandish, and the methods Poirot employs in his battle against the Big Four are just as outlandish. The overall feel is very similar to the kind of breathless excitement that one expects in a very pulpy thriller of that era. Poirot and Hastings have narrow escapes from certain death, and the villains resort to the kind of outrageously melodramatic evil that is bizarrely different from the kinds of crime that Poirot generally deals with.

Fortunately Christie understands that you can’t take this kind of thing too seriously, and the whole thing has something of a tongue-in-cheek tone, especially when Christie has some fun with a certain aspect of the Sherlock Holmes stories. Christie also understands that the one thing you cannot do in this type of thriller is to give the reader enough time to start thinking seriously about the plausibility of the plot. You have to keep throwing new thrills and new horrors at the reader and you have to keep the pacing relentless.

The Big Four is not typical Christie but it is a good deal of fun. Recommended.
Posted by dfordoom at 11:52 PM