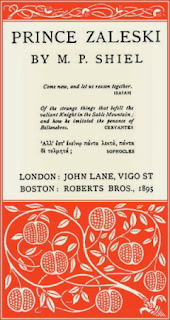 One doesn’t normally think of decadent literature and the detective story as having very much in common with each other. Be that as it may, somehow or other M. P. Shiel managed to combine the two in his Prince Zaleski stories.

Shiel wrote only four Prince Zaleski tales. Three were published in a slim collection in 1895; the fourth did not see publication until 1955, several years after the author’s death, in Ellery Queen’s Mystery Magazine.

The combination of the detective story with the gothic tale or the weird tale was a very common one at the time. William Hope Hodgson’s stories of Carnacki the Ghost-Finder and Algernon Blackwood’s John Silence stories being notable examples. The Prince Zaleski stories have something in common with these, but really they form a strange little sub-genre of their very own. There are hints of the world of the irrational, there’s an interest in the psychology not only of the actors in the drama but of the detective himself. But while the mysteries are certainly out of the ordinary, they contain hints not so much of the world of the supernatural as of the world of the fantastic. Perhaps it would be fair to consider them as being related to the branch of literature referred to by the French as the fantastique.

What really distinguishes them though is the atmosphere of decadence. It’s as if Huysmans’ celebrated decadent des Esseintes had decided to try his hand at crime-solving.

Prince Zaleski never leaves his vast, remote and crumbling old house. Consumed by elegant despair and cultured ennui, he smokes hashish and contemplates the beautiful objects with which he has surrounded himself. He shudders at the thought of reading a newspaper. The idea of taking an interest in the world horrifies. From time to time he is visited by his friend Shiel (who narrates the stories). Shiel is interested in crime and knows that from time to time a case arises that is so bizarre that it has the power to rouse Zaleski from his strange dream-world. Zaleski then applies his immense his intellectual gifts to the solving of the puzzle. He is invariably able to solve the crime without having to suffer the ordeal of having to leave his house, or even to stir himself from his divan.

The three original Prince Zaleski stories are all quite different. The Race of Orven is a gothic murder tale combined with a locked-room mystery.

The Stone of the Edmundsbury Monks is much stranger. The ingredients are an ancient amulet, a stone with possibly mystic powers, a family curse, a mysterious Persian, an indecipherable inscription, and an elderly scholar who may be insane or may in fact be all too sane.

The third tale, The S. S., is stranger still. An epidemic of suicide is sweeping Europe. But is it suicide, or murder? Or even both? Can it be possible that thousands of deaths all over the continent could all be linked in a sinister conspiracy? The only clues are  the slips of papyrus coated in honey found under the tongues of the victims. While the other stories start out strange but eventually the mystery is to some extent dispelled, this take just keeps getting stranger.

These stories are truly not quite like anything else in the crime gene, or any other genre for that matter. They are however weirdly and seductively fascinating and I highly recommend them.
Posted by dfordoom at 2:21 AM