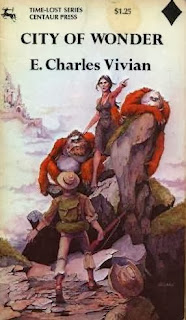 City of Wonder, published in 1922, is the best known of E. Charles Vivian’s lost world adventure novels and regular readers of this blog will know how fond I am of that genre.

E. Charles Vivian was the pseudonym used by Charles Henry Cannell (1882-1947). He wrote science fiction and detective stories but it is his fantasy novels, and more particularly  his lost world novels, for which he is best remembered.

Faulkner (who narrates the tale), Bent and Watkins are three adventurers in search of the lost city of Kir-Asa. They are all old Asia hands, tough and a little cynical but brave and fundamentally decent men. Watkins is the leader and he has promised the other two not just generous pay but the prospect, or at least the potential prospect, of vast riches. Watkins knows rather more about Kir-Asa than he is willing to reveal.

We are never told where this lost city is although we are led to assume it is on an island, possibly Borneo. The journey is fraught with the usual jungle hazards but the legends surrounding the city, and information Watkins has obtained from a journal kept by one of his ancestors (who had reached the city 150 years earlier) tell of additional dangers as well - giant apes controlled by a woman, natives who favour poison-tipped darts, and most mysterious of all the “ghosts who chase women.”

The discovery of an ancient road, a road built on a scale that makes the roads of the Romans look like goat tracks, assures them that the lost civilisation they are seeking was certainly a reality at one time although whether that civilisation survives is uncertain. Unfortunately an earthquake in the distant past has opened up a gigantic chasm that appears to be an insuperable barrier. Watkins however is not the kind of of man to be daunted by anything. A way is found to traverse this obstacle although it involves the terrifying crossing of the “trembling bridge” - a hazard that would make the bravest man think twice.

They find Kir-Asa, but although they also find a civilisation it is not the civilisation they expected. The men who built the city are long gone. The present inhabitants represent a rather lower order of civilisation, but one that is not without its merits and its attractions. The arrival of the three outsiders will precipitate momentous upheavals, upheavals that may be disastrous but that may also be extremely beneficial. Whether events turn out well or ill will depend on the ability of Watkins and his party to guide those events.

One notable feature this book shares with the lost world stories of Edgar Rice Burroughs is a fascinating variation on the theory of evolution. The variation Vivian comes up with is not only as outlandish but also as brilliantly inventive as that of Burroughs.

Vivian was influenced by writers like Rider Haggard and has more literary aspirations the pulp writers who dealt with similar ideas. His writing is not as stylish as Haggard’s but his prose is pleasing enough.

Watkins is the most interesting character, a man who is something of an idealist under a crusty exterior.

The lost world of Kir-Asa is the kind of unspoilt bucolic paradise that appealed so much to so many late 19th century and early 20th century writers. The possibility that the people who lived in such places might actually be keen to enjoy the fruits of civilisation is an idea that never seems to have occurred to such writers. Kir-Asa has its weaknesses though - it is a very stable society, perhaps too stable. Stable to the point of stagnation.

City of Wonder might not be the greatest of lost world adventures but if you’re a fan of the enjoy you should find plenty of enjoyment here. Recommended.
Posted by dfordoom at 1:42 AM