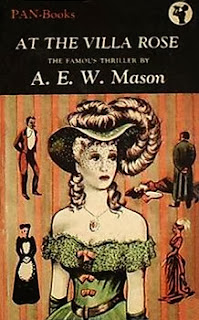 Published in 1910, At the Villa Rose (sometimes known as Murder at the Villa Rose) was the first of A. E. W. Mason’s detective novels featuring Inspector Hanaud.

A. E. W. Mason (1865-1948) is best known for his classic adventure novel The Four Feathers. He wrote only five detective novels but they are both important and unusual (The Prisoner in the Opal being both a detective story and an occult thriller).

Inspector Hanaud is a French detective with an English Watson, Mr Ricardo. Mr Ricardo is a wealthy financier and a man of culture and refinement but it has to be admitted that he is of little help to Hanaud when it come to crime-solving. Fortunately Hanaud does not require assistance and Mr Ricardo’s main function is to give Hanaud somebody to whom he can explain important plot points, and somebody to whom Hanaud can display his own superior talents. Hanaud is not a man to hide his light under a bushel.

Hanaud was loosely based on two real-life officers of the Sûreté, Macé and Goron.

Hanaud is on vacation when he is drawn into the investigation of the murder at the Villa Rose by a young Englishman, Harry Wethermill. The wealthy Mme Dauvray has been murdered, apparently during the course of a robbery (her famous jewels being a very obvious temptation to thieves). Mme Dauvray’s English companion, a young woman named Celia, appears to be the prime suspect. Harry Wethermill is in love with Celia and is convinced of her evidence. He begs Hanaud to take over the case. As the case promises to be an interesting one Hanaud agrees.

Mme Dauvray had been intensely (although rather naïvely) fascinated by spiritualism and appearances suggest that Mademoiselle Celia’s talents as a medium had been the means by which the penniless young Englishwoman had ingratiated herself with the wealthy lady. It further appears that Mlle Celia was to have conducted a séance on the night of the murder.

Hanaud does make some use of psychological insights in order to solve crimes but he most certainly does not neglect physical clues, and those physical clues in this case seem to be so contradictory than even the great Hanaud has to confess himself baffled, at least temporarily. Hanaud is not however a man to be put off by difficulties. The more challenging the case the better he likes it.

At the Villa Rose has the complex plotting that would later come to characterise the golden age of detective fiction. While the plot is ingenious Mason generally avoids the more bizarre and unusual elements that often appear in detective stories of its era.

Rather usually, and rather boldly, the identity of the murderer is revealed two-thirds of the way through. The ensuing very long explanatory segment of the book could have been a serious weakness (such lengthy explanations generally are) but although we know who the murderer is we do not know Hanaud arrived at his conclusions nor do we know how the murder was committed. As a result the last third of the book maintains our interest without too much trouble.

The spiritualism aspect is an intriguing foreshadowing of the much more involved occult elements in The Prisoner in the Opal.

At the Villa Rose is an Edwardian crime novel that looks forward to the tightly plotted detective stories of the 1920s. Hanaud is a great detective in the tradition of Sherlock Holmes, with all the egotism we expect from such figures, but he is amusing and Mason’s considerable literary gifts are a major plus. Highly recommended.
Posted by dfordoom at 11:17 PM