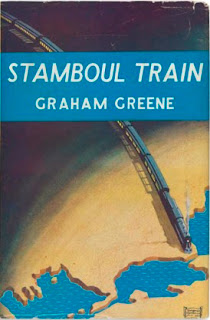 I’m not sure what Graham Greene would have thought about being included in the category of vintage pop fiction, but given that Stamboul Train was one of the books he himself classed as “entertainments” as distinct from his serious novels he might not have minded that much. The intention of the 28-year-old Greene with this novel was to write something successful enough to put his literary career on a firm footing, and it did just that.

Published in 1932, Stamboul Train has the perfect setting for a thriller - the Orient Express.  Its claims to being a thriller are perhaps a bit tenuous, but it does include a murder and a failed revolution, and there are some tense thriller-like moments towards the end.

Greene’s real focus is on the characters, in particular on five of the passengers on the train. Dr Richard Czinner is a failed revolutionary. Carleton Myatt is a rich Jewish businessman. Coral Musker is a chorus girl on her way to Constantinople to appear in a show. Josef Grünlich is a thief and a murderer. Mabel Warren is an alcoholic lesbian newspaper reporter.

Since this is a Graham Greene novel, they are all failures in one way or another. All of them fear betrayal. They either fear being betrayed, or they fear betraying others.

Dr Czinner has replaced the religious faith of his youth with socialism, the ultimate substitute religion. Of course, as it always does, it proves to be an unsatisfactory substitute. Dr Czinner is quite capable of loving abstractions like “the poor” but one feels that he has never actually loved a human being as an individual. He believes he is on his way to lead a revolution, but the revolution has already failed. Now all that is left to him is the possibility of a last grand gesture. Like most grand gestures, it ends up being futile and pathetic.

Carleton Myatt is painfully aware of his Jewishness and is always expecting to be snubbed. He has the opportunity of finding something approaching love, but will he have the courage to accept it?

Coral Musker receives an offer that will offer her financial security, but she also is so afraid of betrayal that she is reluctant to accept.

Josef Grünlich is the only one who doesn’t fear betrayal. He betrays everyone.

Mabel Warren goes through a series of infatuations with heterosexual women. In this way betrayal is guaranteed. She does not comprehend love, but she is very familiar with, and very comfortable with, hatred. It is the force that drives her.

Betrayal drives the plot as well as the characters, and it gives the story the right sort of paranoid feel for an espionage thriller. Given Greene’s rather dark view of the human condition espionage always provided him with ideal subject matter.

I’ve always been a sucker for mysteries or thrillers that take place aboard trains and Greene uses this setting very effectively.

Stamboul Train is a neat little spy thriller that can be thoroughly recommended.
Posted by dfordoom at 6:38 PM