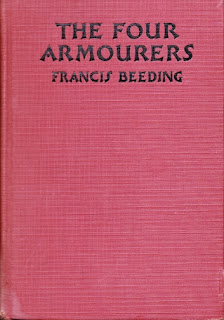 Hilary Aidan Saint George Saunders (1898-1951) and John Palmer (1885-1944) wrote both thrillers and detective novels under the name Francis Beeding, their best-known book being undoubtedly The House of Dr. Edwardes (filmed by Alfred Hitchcock as Spellbound). The Four Armourers, published in 1930, is one of their thrillers.

I was not overly impressed by the one Francis Beeding detective novel I read, Death Walks in Eastrepps, but The Four Armourers turned out to be much more to my taste. The novel features their main thriller series hero, Colonel Alistair Granby.

Granby and John Baxter, a friend who works for the League of Nations (and who serves as narrator), are in Spain when they run across an old acquaintance of Granby’s, Jules Lemaistre. This pint-sized Frenchman who seems to be perpetually afraid is in fact a daring freelance spy and he is convinced that he is on to something very big indeed. Lemaistre dies before he can reveal all the details, leaving Granby and Baxter with a rather inconvenient body on their hands. Granby is used to such situations and deals with it in a characteristically ingenious manner.

Granby finds himself up against some old foes, a sinister cartel of arms dealers known as the Four Armourers. This cartel is after something very important, and so is a a very wealthy American arms dealer named Hazelrig. It is something worth killing for, and something that could have momentous consequences for the peace of Europe, and indeed the world.

What is this mysterious something they are all seeking? The authors, wisely, don’t tell us, at least not until the very end. It is after all what Alfred Hitchcock termed a McGuffin - something the audience (or in this case the reader) doesn’t need to know anything about other than that is very important to the characters in the story. It is the plot device that drives the story. The more mysterious the nature of the McGuffin the more effectively it serves its plot purpose. Explaining its nature would distract the reader from the chase. The authors have no intention of slowing down their story by doing this.

This puts the emphasis on the excitement of the chase, the danger, and the suspense and the authors prove to be very adept at maintaining this focus. There is no shortage of excitement as first one side and then the other seems to be on the verge of attaining the object only to have it snatched away again at the last moment. There are double-crosses aplenty. There are knife fights, shootouts, car chases and kidnappings. There are chases on foot, by aeroplane, by train and in fast cars. There’s a rather clever scene in the vast palace of the Escorial near Madrid, a race against time to locate a key character. The race against time element is always useful to a thriller writer and it’s used skillfully and in a number of different ways in this novel.

Of course you can’t have a thriller without a beautiful dangerous woman who may be an ally of the heroes, or may just as well turn out to be a deadly enemy, and in The Four Armourers Donna Concepcion plays that femme fatale rôle nicely. And of course a thriller has to pit its hero against worthy villains and this novel offers some very worthy and very smooth villains.

Granby is the classic type of hero you expect in a British thriller of this era - brave and noble but in an understated and very British way.

The only real weakness comes when the nature of the McGuffin is revealed. The McGuffin itself is ingenious enough but to modern readers familiar with the futility of such organisations the heroes’ faith in the League of Nations now seems sadly naïve. That’s a very minor quibble however.

The Four Armourers is a tightly-plotted spy adventure tale that works very neatly. It’s very much in the John Buchan style and that’s certainly no bad thing.

Highly entertaining. This one is a definite recommendation.
Posted by dfordoom at 8:51 AM