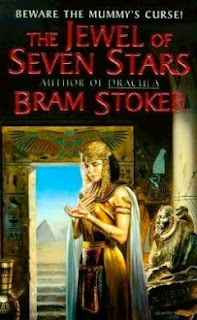 The Jewel of Seven Stars is one of several novels written by Bram Stoker in addition to Dracula. His novels are wildly uneven. The Lady of the Shroud is dull, uninteresting and almost unreadable. The Lair of the White Worm is bizarre and highly entertaining. The Jewel of Seven Stars, published in 1904, is different again. And this one is actually very good!

A barrister named Malcolm Ross receives an urgent call to the home of an eminent although perhaps slightly eccentric Egyptologist, Mr Trelawney. He has been found, apparently in a deep coma, in a room of his house filled with Egyptian antiquities including the mummy of an Egyptian queen. The room is filled with an overpowering and pungent aroma but Trelawney has seemingly anticipated this situation and left strict instructions that his body, whether alive or dead, is not to be moved from the room.

Ross, along with a Scotland Yard detective, Trelawney’s doctor, a nurse and Trelawney’s daughter Margaret keep a vigil by his bedside but are overcome by a strange sleep. When they awake they discover a deep gash on the arm of Mr Trelawney and evidence of an attempt to open his safe. There is no logical explanation for any of these odd events until the arrival of a mysterious colleague of Trelawney’s who has a strange tale to tell. Some centuries earlier a Dutch explorer has discovered the tomb of an Egyptian queen who had so offended the priests that her name had been erased from all records. Trelawney had been inspired by this book to find the tomb, and had succeeded. He brought the queen’s mummy and the various grave goods back to England, including a very unusual ruby carved with hieroglyphs and with a representation of seven stars.

Trelawney’s further researches reveal that the mummy is that of Queen Tera, and that the queen had set in motion an extraordinary plan for her future bodily resurrection. Trelawney becomes obsessed, his obsession increased by the fact that his own daughter Margaret was born at the exact moment he uncovered the queen’s tomb, and Margaret bears an uncanny resemblance to the long-dead monarch. He has discovered the means by which Queen Tera intended to effect her resurrection, and he has resolved to put her plan into operation. Ross isn’t sure this is entirely a good idea, especially given that he has now fallen in love with Margaret.

Stoker builds the suspense and the sense of mystery and of the uncanny with considerable expertise in this short novel. There isn’t a great deal of overt horror but it’s an entertaining and effective weird tale. While it doesn’t have the complexity of Dracula it’s arguably a better written and more tightly constructed book. A highly enjoyable read.

The Wordsworth Classic edition (included in their mummy anthology Return From the Dead) includes both the original 1904 ending and Stoker’s revised 1912 ending.
Posted by dfordoom at 11:57 PM