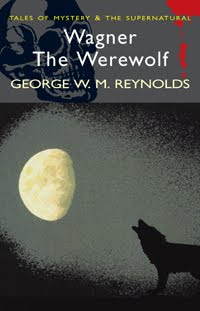 Wagner the Werewolf is my second foray into the weird and wonderful world of the Victorian penny dreadfuls, the mid-19th century equivalent of 20th century pulp fiction.

These lurid tales were published in weekly installments, and aimed at the least prestigious sector of the fiction market, working-class audiences who were literate but not possessing the benefits of higher education. At least that was the view of the literary establishment, by whom they were thoroughly despised. Of course it’s likely that the readership wasn’t entirely confined to the working class, and these thrilling stories may well have been secretly enjoyed by lower middle-class readers who would never have admitted to buying them. The taste for sensational stories of crime, murder, horror and sin was more or less universal among the Victorians.

George W. M. Reynolds was an immensely popular author of that period. He had a taste for radical politics, a genius for controversy, a sublime disdain for copyright laws and he knew what his readers wanted. They wanted sex and violence, plus a happy ending. An that’s what he gave them. He also inserted his political views and his advanced ideas on subjects such as religious tolerance into his books - it’s no coincidence that the most admirable characters in this tale are a renagede Christian turned Moslem and an elderly Jew.

Wagner the Werewolf, which appeared in 1847, is more a gothic melodrama than the sort of thing that modern readers would recognise as horror. The werewolf of the title is just one of a dozen or so main characters who figure in the incredibly convoluted and contrived plot.

And the focus isn’t on his lycanthropy as such. The lycanthropy is merely the curse that makes Wagner a doomed gothic hero who must struggle to save his immortal soul after an ill-advised pact with a demon. The pact restores youth and vitality to a 90-year-old shepherd, and also gives him great learning and vast wealth. He becomes a figure in society in 16th century Florence, but at a terrible price. And he’s not the most interesting character - that distinction goes to the Lady Nisida, a very morally ambiguous and utterly ruthless character who manages to be both heroine and villainess. Her family also suffers under a curse. There are assorted murders, heroes and heroines are consigned to the tortures of the Inquisition. A young Florentine takes service with the Sultan and rises to the peak of power in the Ottoman Empire. There are family secrets that are not to be revealed until the end of the story. There are intrigues, and there’s lots of illicit sex. There are also some moderately gruesome scenes.

The supernatural elements are important, although they’re mostly important in providing Reynolds with the opportunity to present his book as moral entertainment and to ensure that both virtue and vice are suitably rewarded.

The style is pulpy and trashy and insanely breathless. It is in fact pure melodrama. The plot is outrageous in its use of unlikely coincidences and transparent plot devices. Reynolds manipulates our emotions shamelessly. And he doesn’t neglect the all-important titillation. He never misses an opportunity to get his heroines naked, or to wax lyrical over the magnificence of their figures and the voluptuousness of their bosoms. It’s all very crudely done, but that just adds to the charm. Reynolds knew his market, and he wasn’t interested in literary respectability.

It’s lots of fun in a delightfully trashy way, and if you accept it on its own terms its thoroughly entertaining.
Posted by dfordoom at 5:54 AM