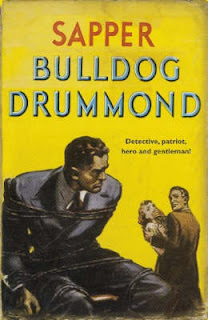 Bulldog Drummond was one of the most popular fictional characters of the 1920s and 1930s. Bulldog Drummond, published in 1920, was the book that launched the career of this gentleman crime-fighter and adventurer.

Herman Cyril McNeile wrote the Bulldog Drummond novels under the pseudonym Sapper. Or at least he wrote the first ten or so novels - after McNeile’s death in 1937 the series was continued up to the mid-1950s by Gerard Fairlie.

Drummond became an equally popular character on radio and in movies, being played by such notable actors as Ronald Colman, Sir Ralph Richardson and Ray Milland. In the 60s the character was revived for two highly entertaining James Bond-influenced spy spoof movies, Deadlier Than the Male and Some Girls Do. Which was only fitting since the Bulldog Drummond stories had been an early influence of Ian Fleming’s Bond novels.

In Bulldog Drummond we meet Captain Hugh Drummond, and he’s bored. Peacetime does not agree with him. He misses the excitement of the war. So he places an ad in the newspaper, offering his services in any kind of adventure regardless of its legality or of the danger involved. Most of the replies are unpromising but then he hits pay dirt - a genuine damsel in distress.

The damsel in question is Phyllis Benton and her story at first seems incredible - a tale of master criminals, sinister plots and daring robberies in which her father has become an unwilling accomplice. Drummond soon discovers that her story is not merely true, it’s actually much stranger than even she realises. In fact they have stumbled upon a conspiracy of almost unimaginably vast proportions in which the very fate of British civilisation is at stake. A gigantic communist conspiracy, funded by fabulously wealthy capitalists.

This was the first of the four novels featuring arch-villain Carl Petersen. Petersen is a master of disguise, and he’s a very cool customer. His chief henchman Henry Lakington is a very nasty pice of work indeed - his main amusements being devising sadistic means of murder and torture and pulling off spectacular jewel robberies. There’s also Petersen’s beautiful, amusing but evil daughter Irma. At least she claims to be his daughter, but may well be his mistress.

There’s plenty of action, and plenty of humour. Drummond is at this stage of his career very much an amateur. His main assets are his daring and his courage, his tendency to do the unexpected because he doesn’t know any better, and the fact that his opponents consistently under-estimate him, regarding him as a harmless buffoon. By the end of the adventure he has acquired a great deal of experience and a very definite taste for this type of exploit.

It’s all very politically incorrect but if that doesn’t bother you (and it certainly doesn’t bother me) then there’s a great deal of enjoyment to be had within the pages of Bulldog Drummond.
Posted by dfordoom at 5:04 AM